Alsace to Freiburg – with Oli

For the long weekend around first of may i was thinking about a location/tour… Several ideas were in my head. Alsace, Pfalz… Then came a invation to a party of my friend Recep in Freiburg. Destination save!

I talked with another friend for hosting Oli (who would join me) and me for one night. He got me the advice to ride the Rhine/Rhône canal starting in Strassbourg. I searched on google maps for a spot to spent the night, i figured out a location…

We started on saturday, after less than a k was the first break for an espresso at Tostino, a local nice coffee spot. Then we headed with some clouds to direction Rhine river to get on the french side. For switching the border we had to use a ferry. Too bad 😉 Next stop for a coke was a snackbar in Seltz, beside the Rhine at a parking lot. Then we were rolling till Strassbourg. During that we also we had another break for a coffee and some sweets. Also one of my cranks started to make ugly noises… It got loose… Happily we stopped at a garage and the lent me an imbus to tighten it. Travellers luck! 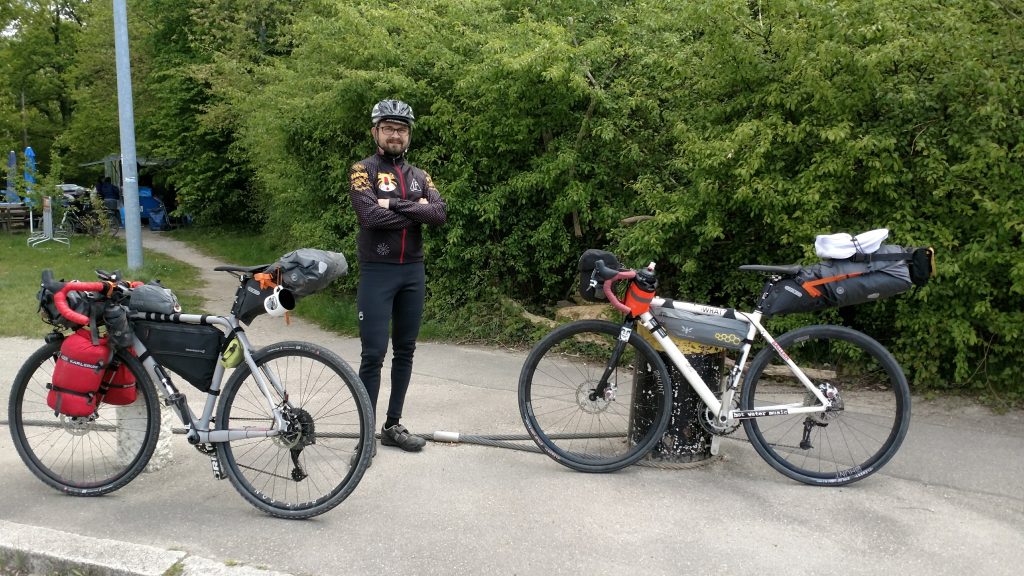 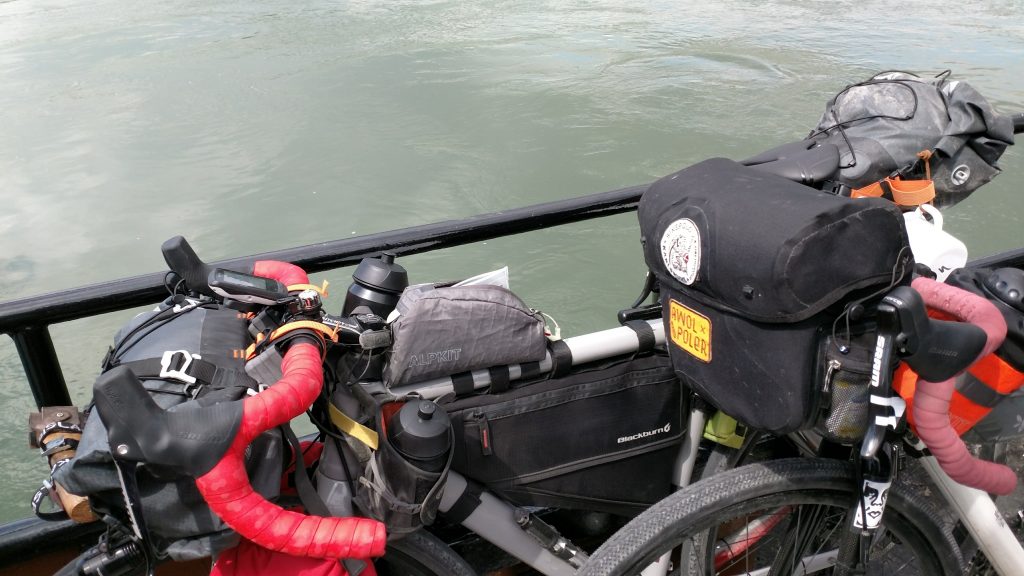 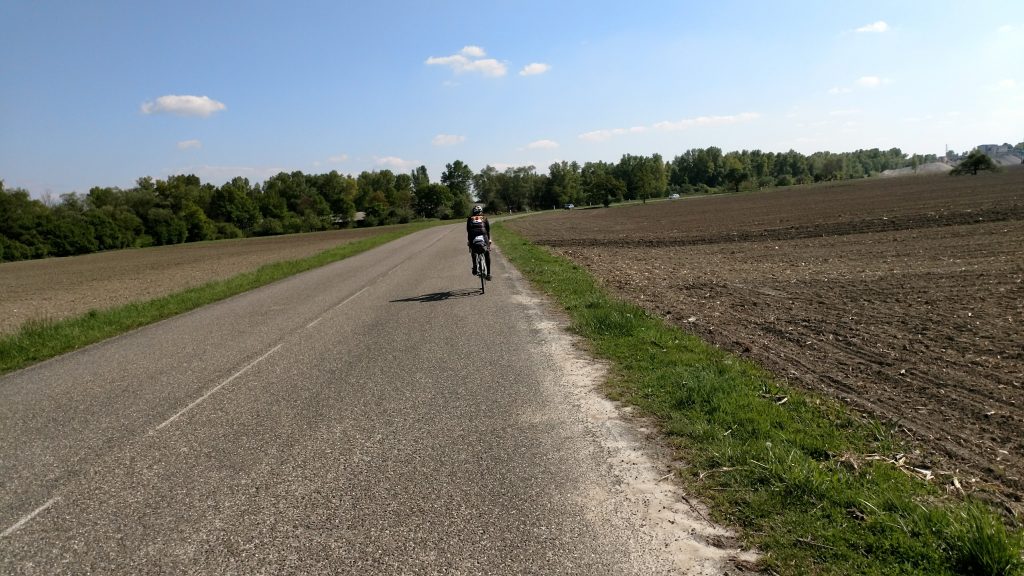 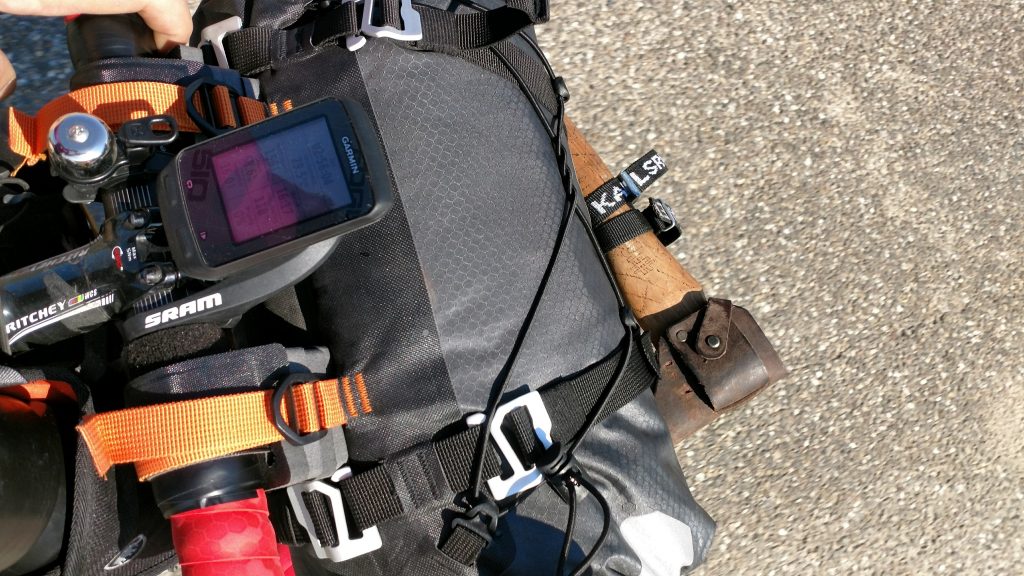 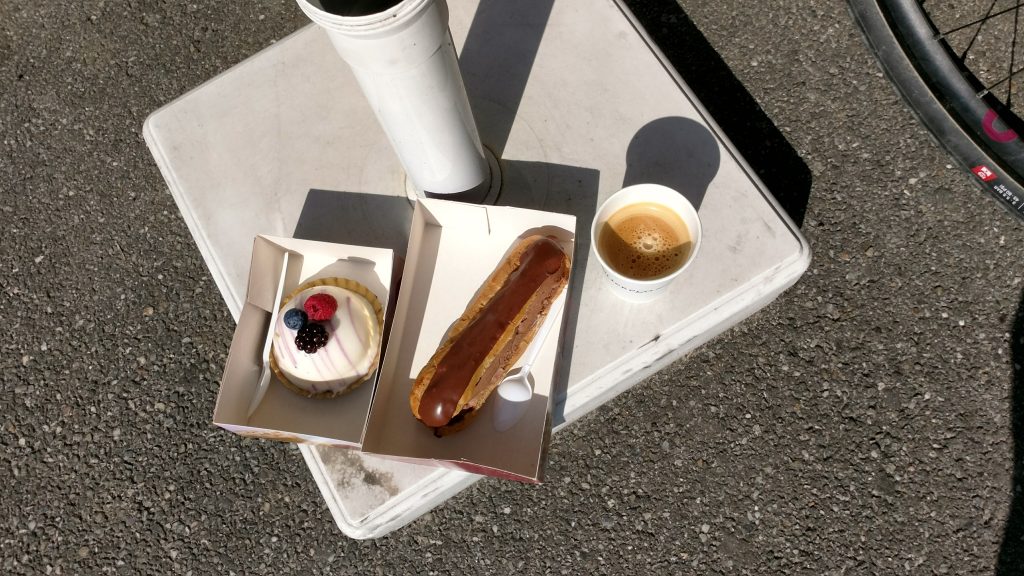 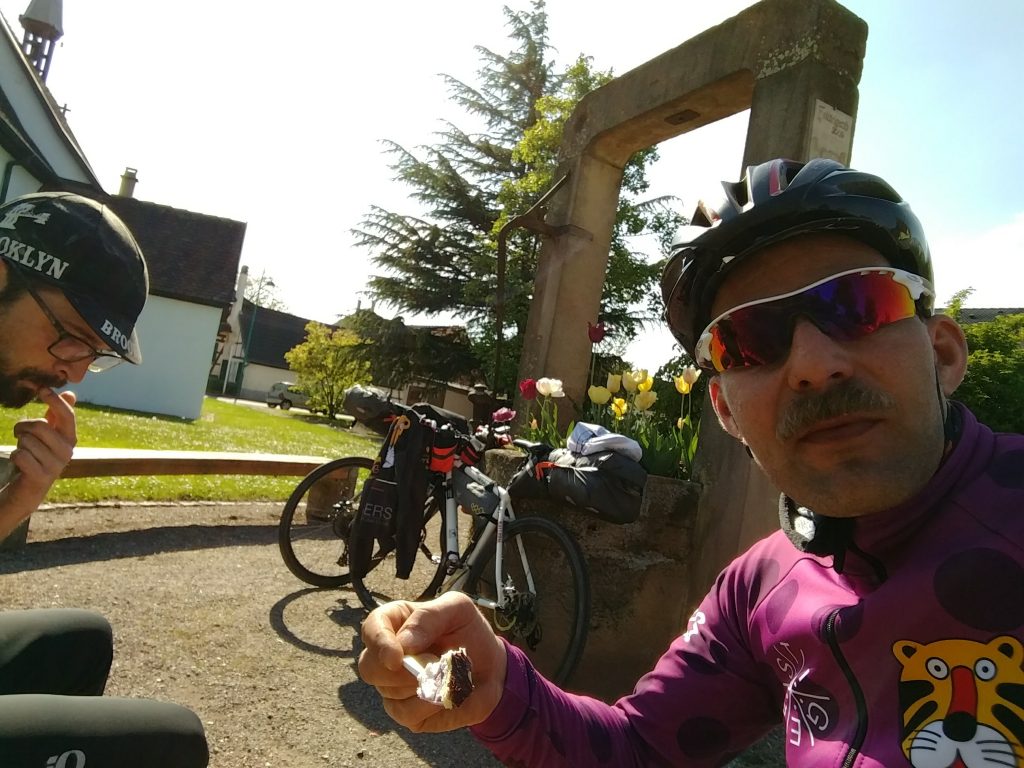 Strassbourg was crowded with tourists. We had to pass the old area where most of the tourist were hanging around… Too many people. We managed to find the start of the canal. We rode a bit beside it, then we went to a suburb to find a supermarket and a restaurant for dinner. We found both. Got some coffee and water for breakfast and some beers for the upcoming campfire. Beside the supermarket was a pizzeria called ‘la pizza de nico’ with a green apple as logo. I stopped thinking about the sense of that… Btw, the pizza was delicious. Filled with dinner and a bit tired we started to find a/the sleeping spot. Back beside the canal we had about 10 k’s until we reached the place which i thought would be got as a spot. 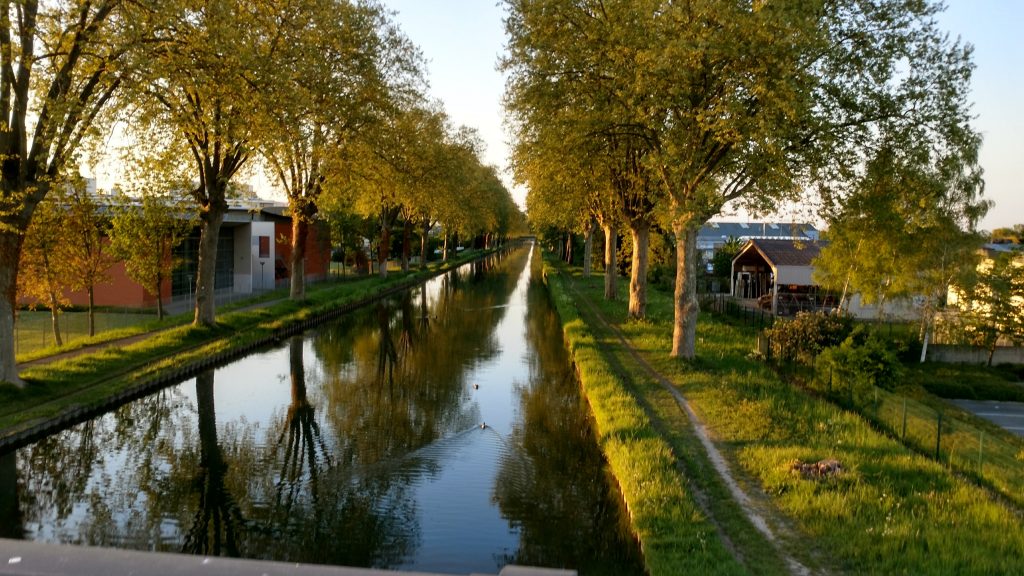 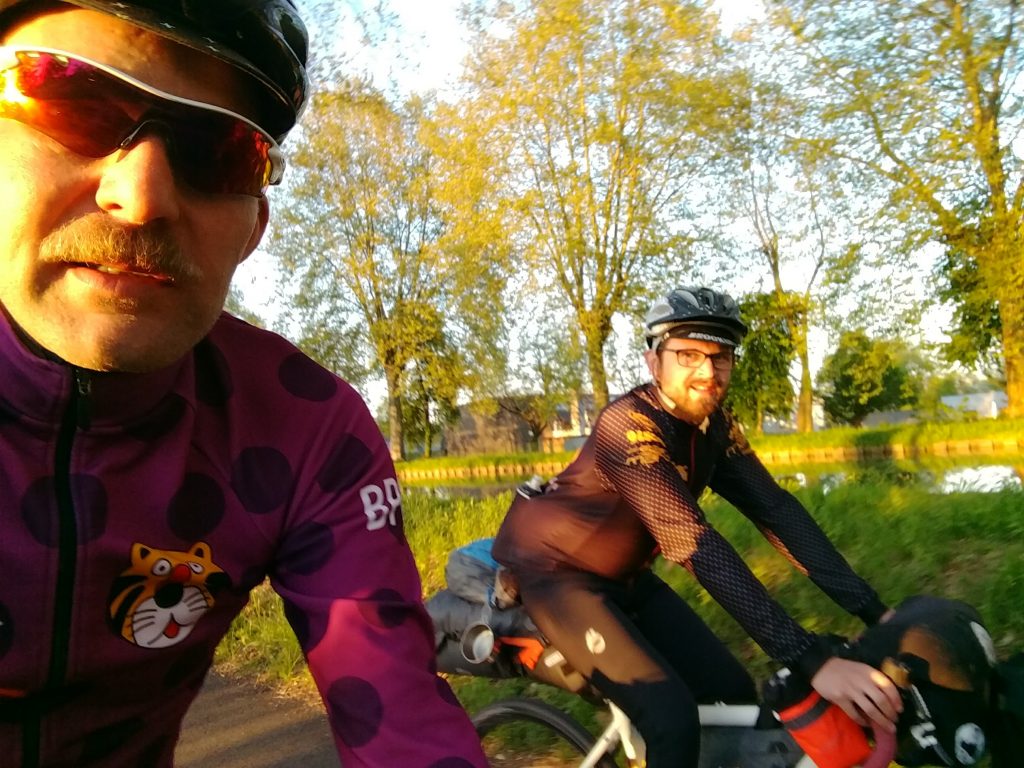 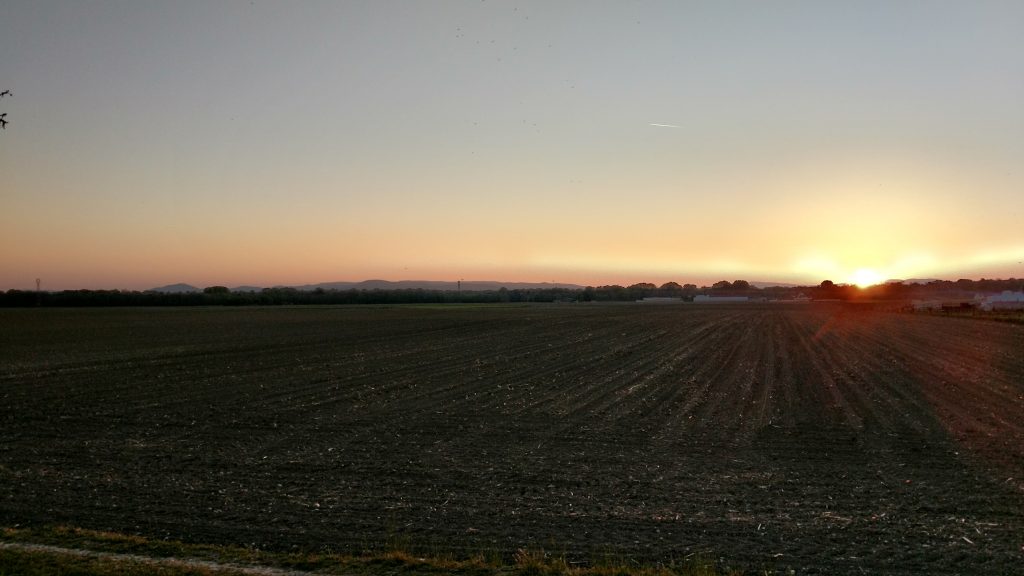 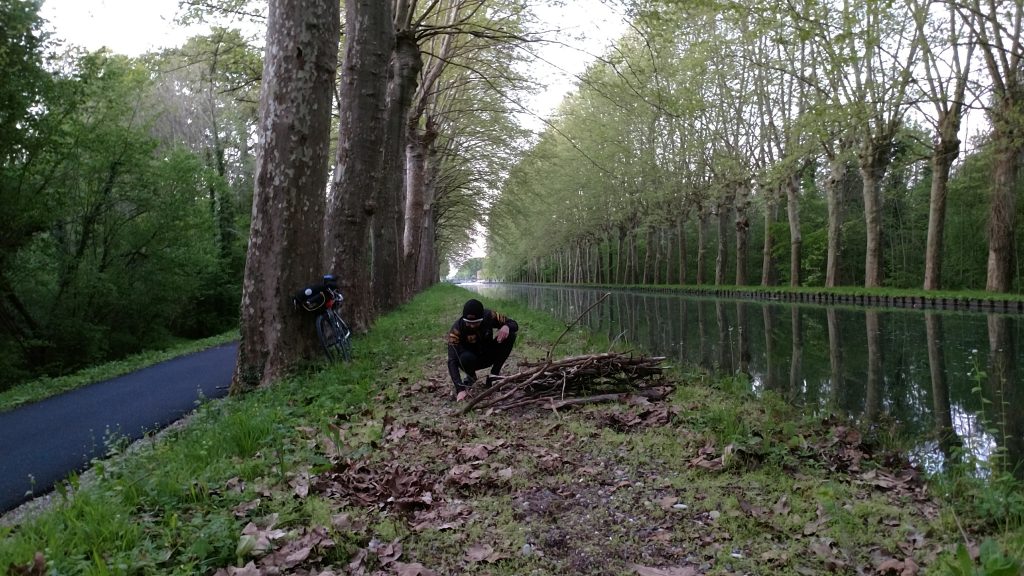 It was! Canal, a few meteres of gravel and gras, the bike lane and there beside the woods. Sweet! We collected directly wood for the campfire. Soon we lighten it up, cause the sun went down and it got colder. After finishing the beers and the wood we went sleeping. It got quite cold this night, maybe it’s also not the best idea to sleep beside a canal this time of season. 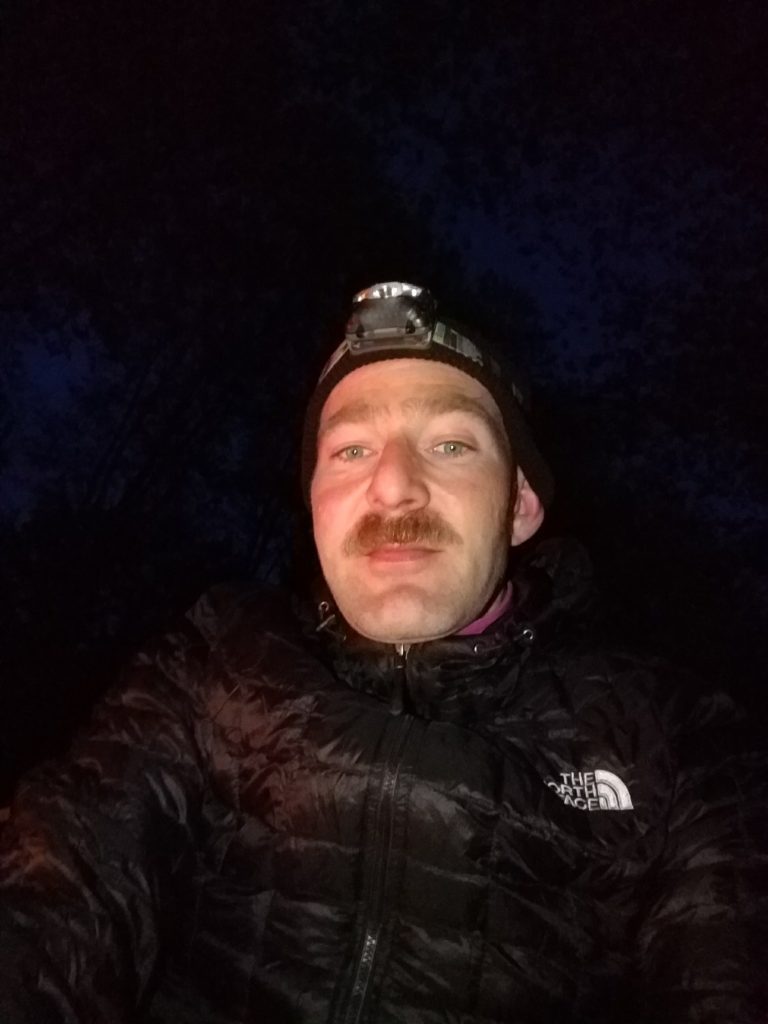 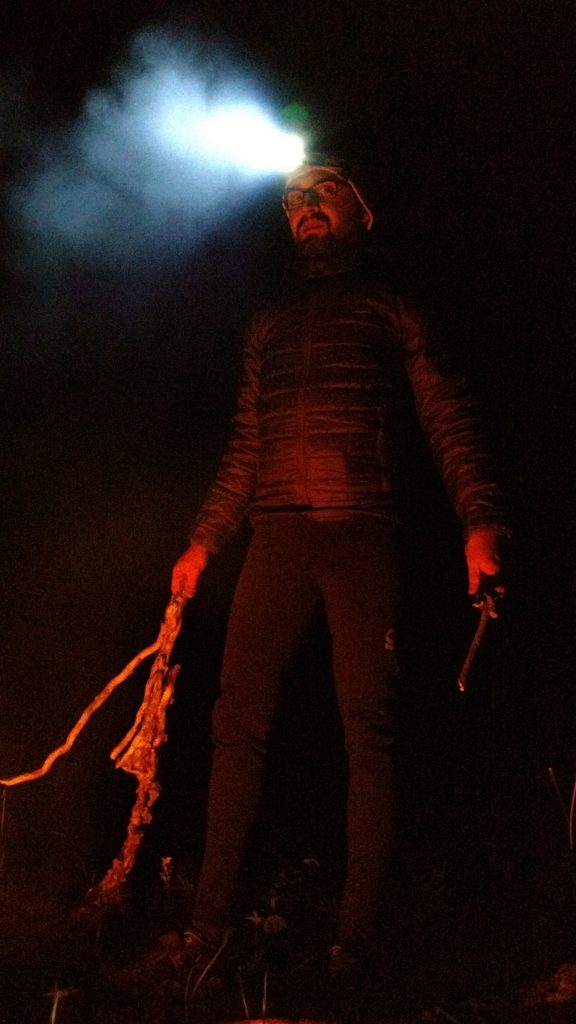 When i woke up around 7 a.m. there was fog over the canal. And sun! Nice scenery! The first road cyclist passed the spot at 7.30. I felt asleep again. Around 9 i got up to make coffee. The sun was out and warming me. Another coffee. Oli still sleeping. Then i asked hom about coffee, made the next can and he got up when i was finished. We packed then our stuff and cleaned the spot. You couldn’t see that someone slept there, also the fireplace was gone. Maybe just hidden 😉 After 3 k’s we reached a small village beside the canal and found an open bakery. We grabbed there some of the finest stuff and a coffee. On the other side of the road we found a bench in the sun for our second breakfast. After that we headed back to the canal for more cheesy k’s. 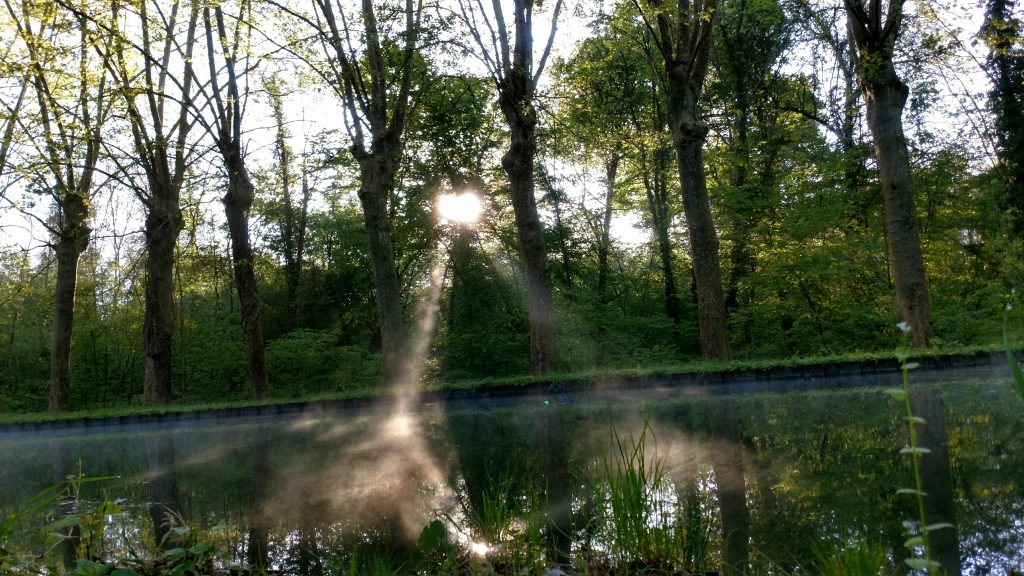 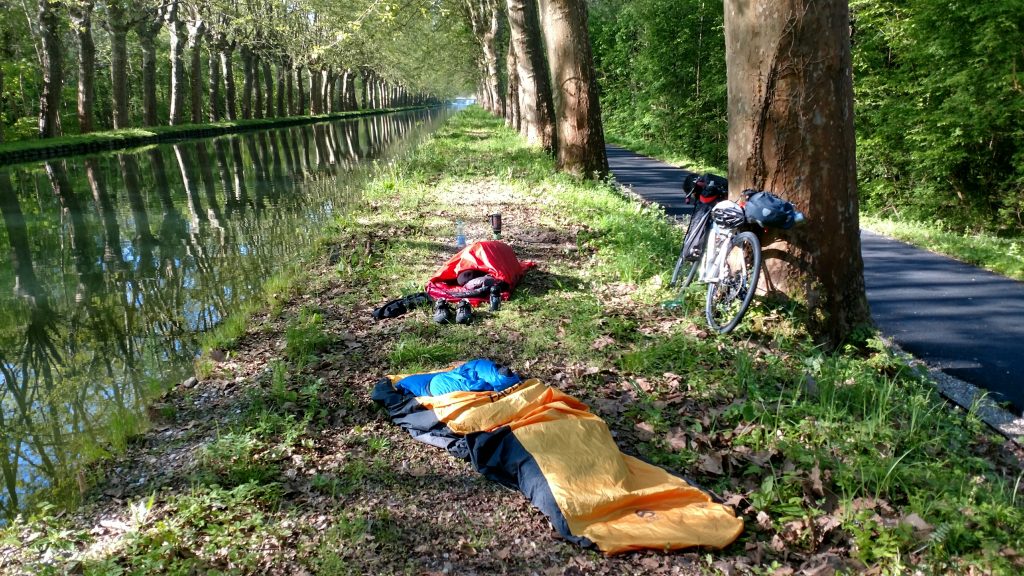 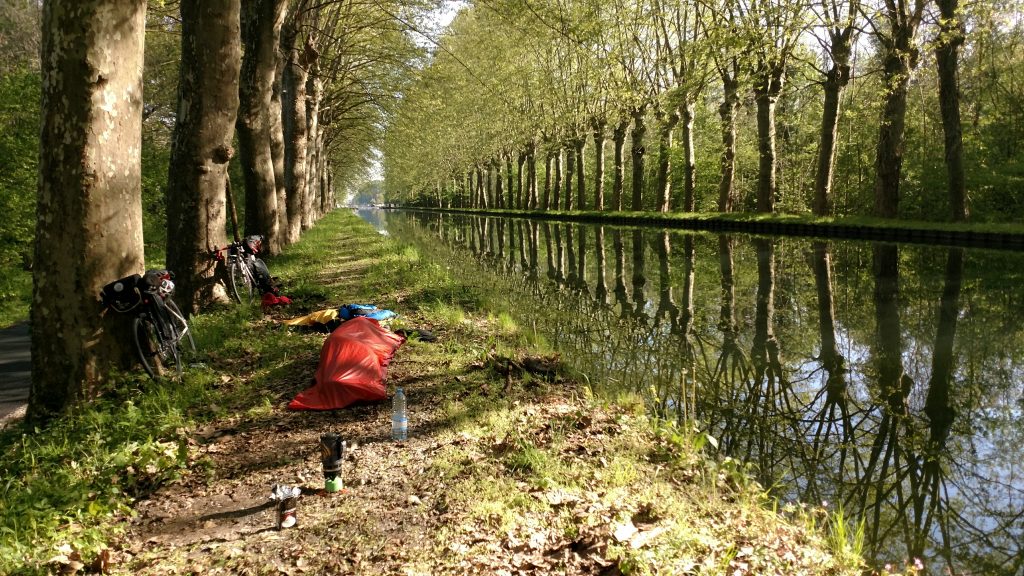 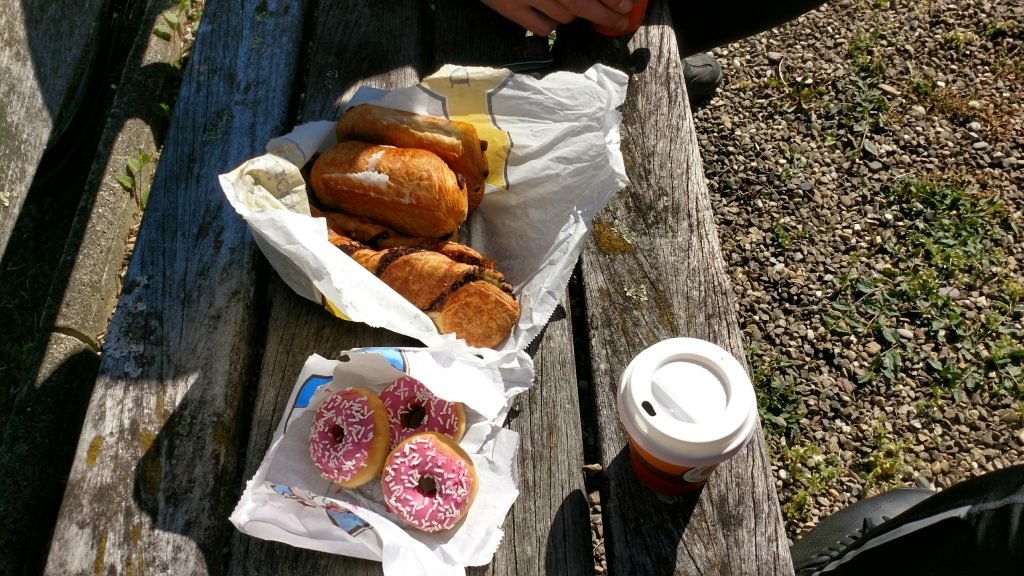 Somewhen we could see the vosges with snow on top to the right. On the left side was the black forest with snow on the higher hills. Amazing view! Then we had to leave the canal to go eastwards. We went for lunch in the next bigger village, found a restaurant and got some Flammkuchen and Spaghetti. We could go further in short/short clothing. Wonderful, summertime! Crossing the Rhine and the border to germany the bike lanes got more and more crowded. We passed fruit plantations. Then we were riding along the Dreisam river, getting nearer our destination of that day. A friends house in Kirchzarten above Freiburg. In Freiburg it felt like summer. So many people hanging around and in the Dreisam. They enjoyed the sun, had BBQ and drinking beers. 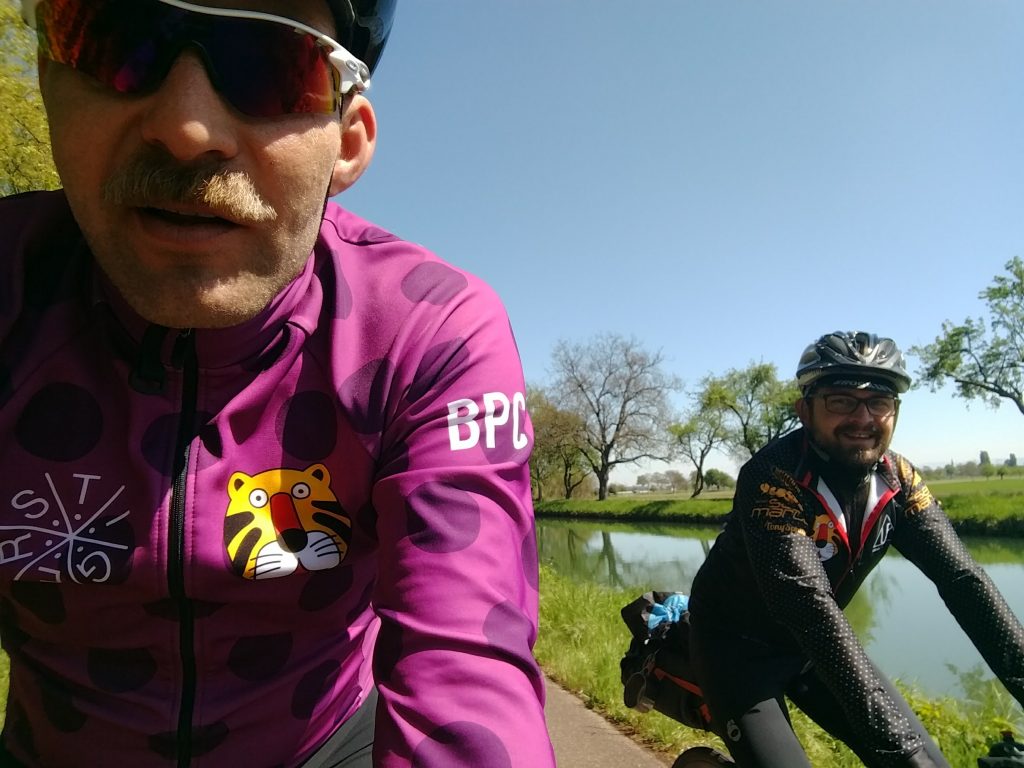 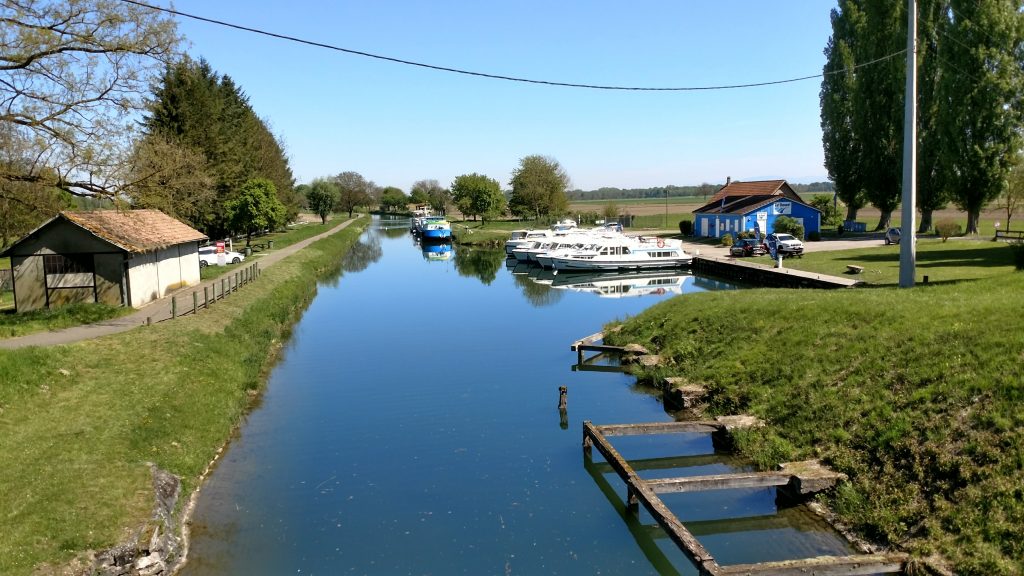 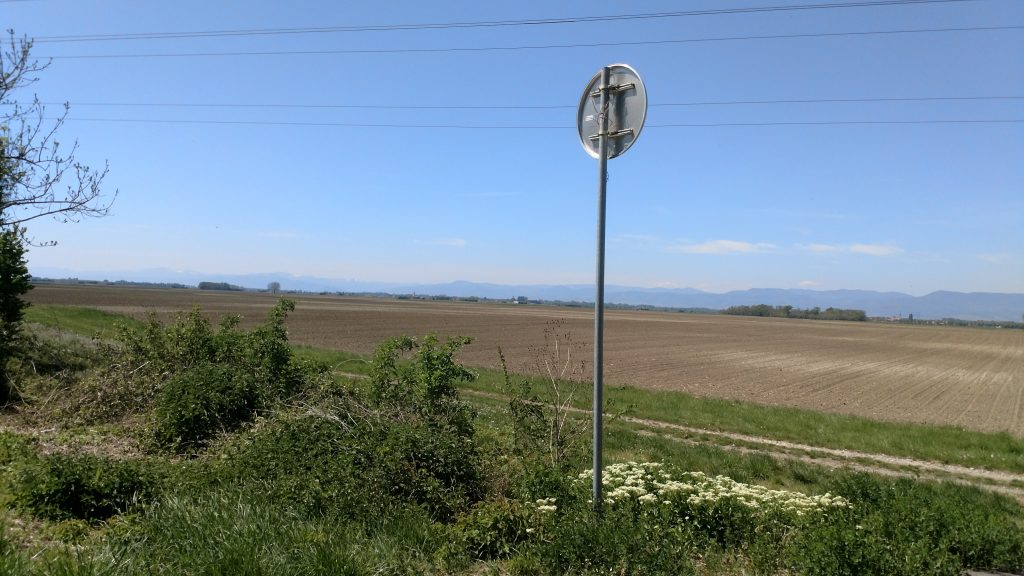 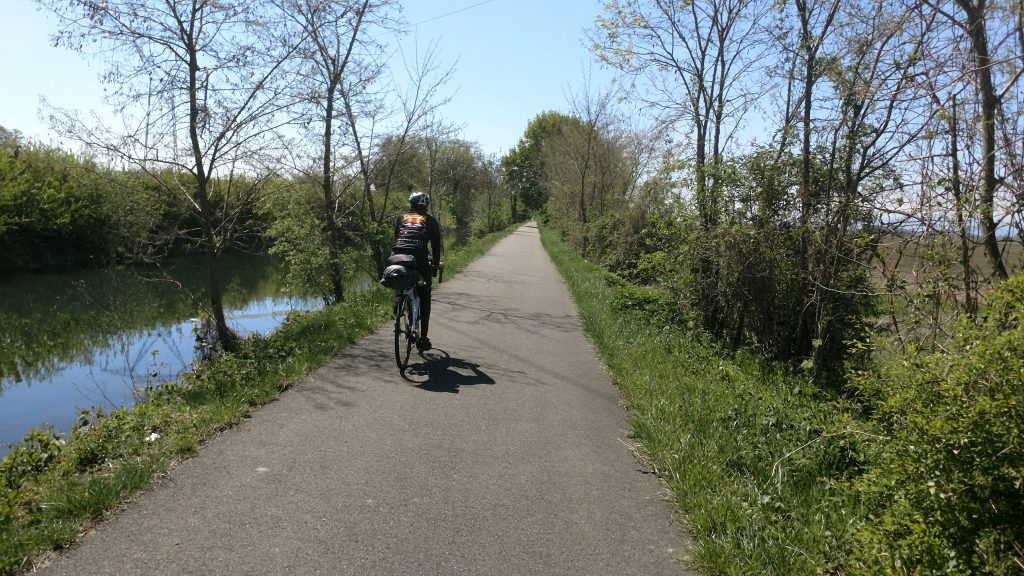 Soon we reached Hanni’s place. They were waiting with a fire, BBQ and cold local beers. Perfect! The view you have over there is quite relaxing! An easy evening with our lovely hosts! 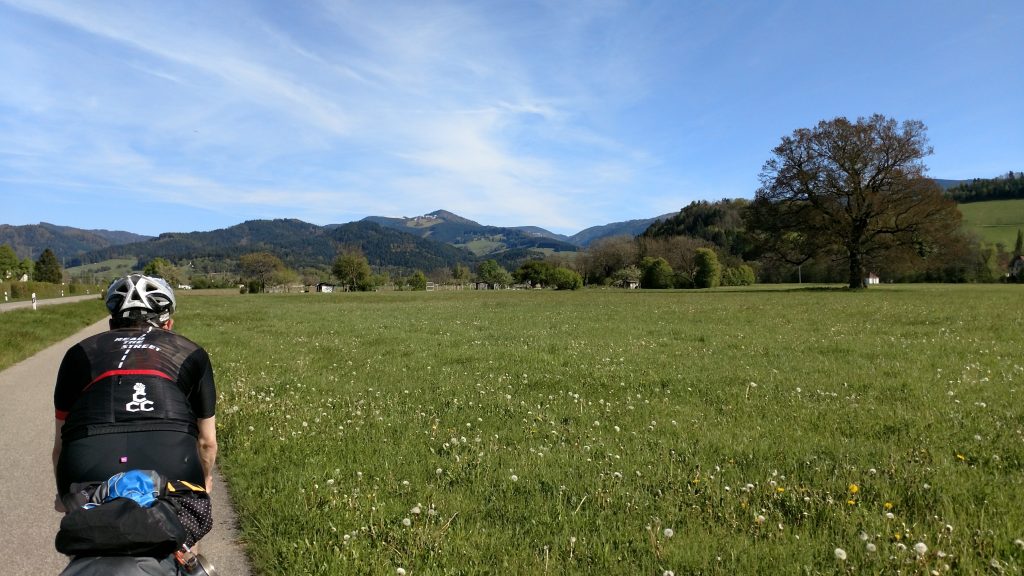 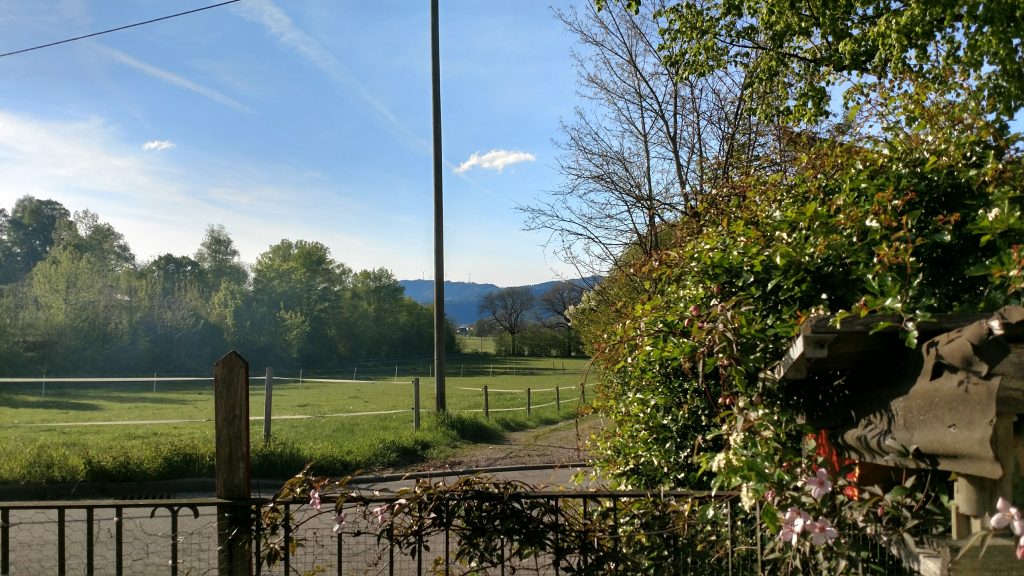 The weather was not great the next day. Rain and clouds. We played memory with the kids and ate cake. For the party we started early afternoon. On the way to Freiburg we met some colleagues of our friend who started for a road bike tour. We went together on as a funny looking peloton. Reaching Freiburg with top speed.

We arrived at Recep’s place, again delicious food and nice people! Around 8 p.m. we took the train back home. Such a great weekend!t