My old friend Erik (i know him since 20 years, snowboard time….) posted on facebook a pic of a hill near here where he went to sleep during the workdays…
I got connected to him because he also was now addicted with bikes since a while and we wanted to plan for an overnighter during the week at the awesome ‘Bernstein’. So it will be a ‘after work party’. We found a date and planned to meet after work, grab some drinks and food on the way, sleep uphill and going directly to work the next day. The day came nearer and i was so excited to be there at night. I left work, rode home, changed the bike and got dressed. Then i rode to our meeting point. Bright sun. I already placed some clothing to change and stuff for a shower. So i don’t have to carry it 😉 The way to Bad Herrenalb is a real nice gravel way, mostly beside a small creek.

At nearly 60% of the way there is a supermarkt to buy dinner. (sausage with spinach is now mandatory!) 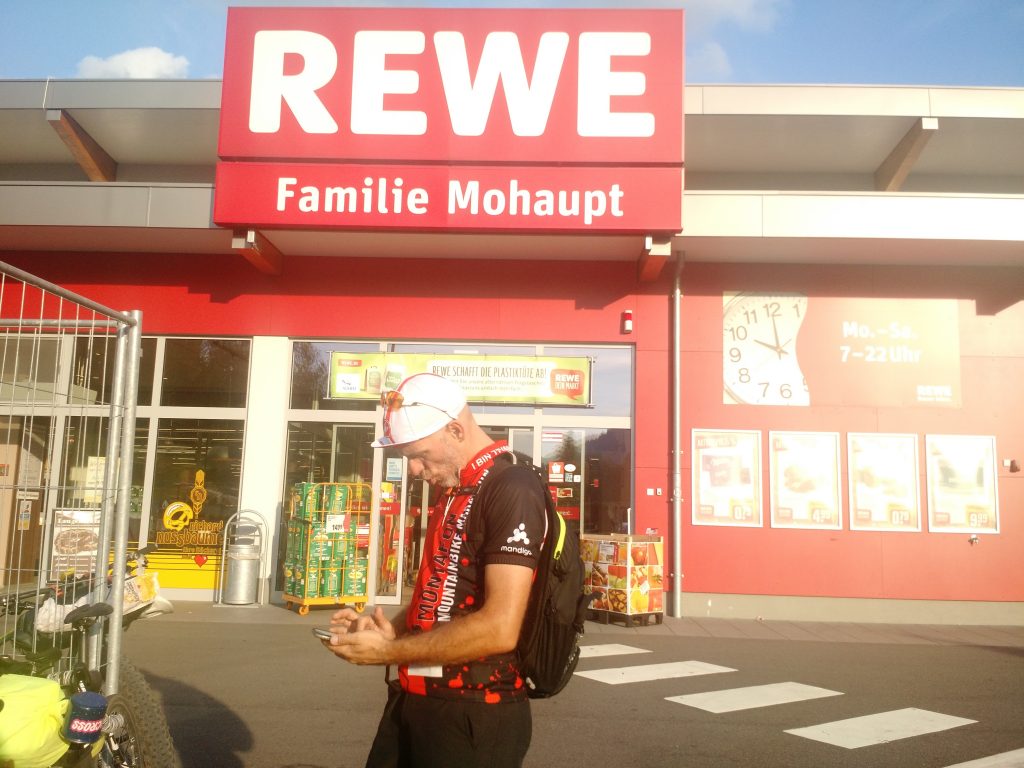 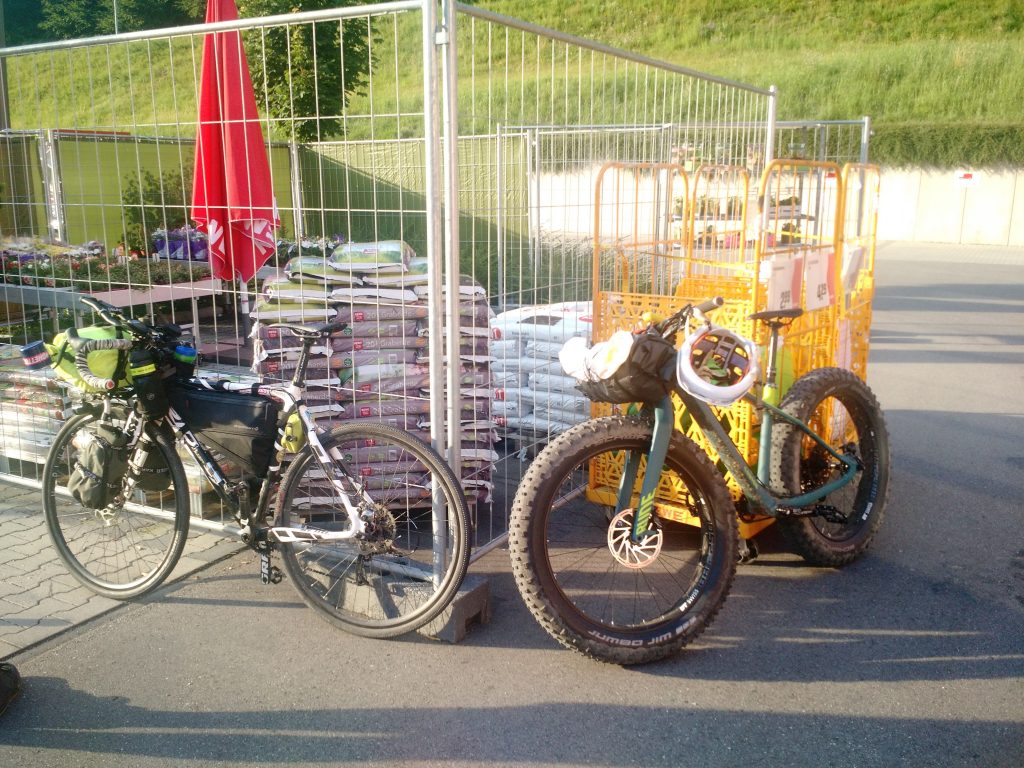 the horses of carbon

After shopping comes the harder way. Till now i know four different ways up to there. One is with half way up tarmac, the rest are gravel and more gravel paths. This time we choosed the ‘oldest’ one. At the beginning stones and not really grippy with 35mm wide tires. Oh, Erik’s fat bike had enough traction.

This time i was so concentrated to reach the top that i don’t have a picture of the way up which is about 5k only uphill, loose ground and up to 14% grade… When you reach the top, you have really deserved it. And a cold beer! (Also because you carry it all way up!) 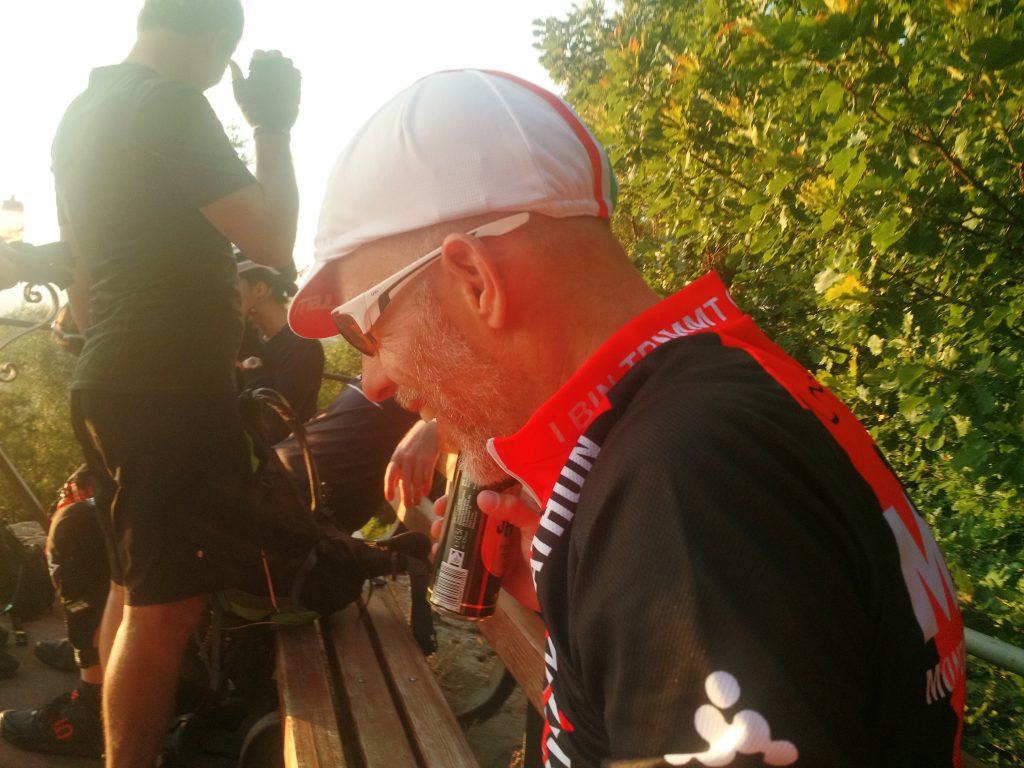 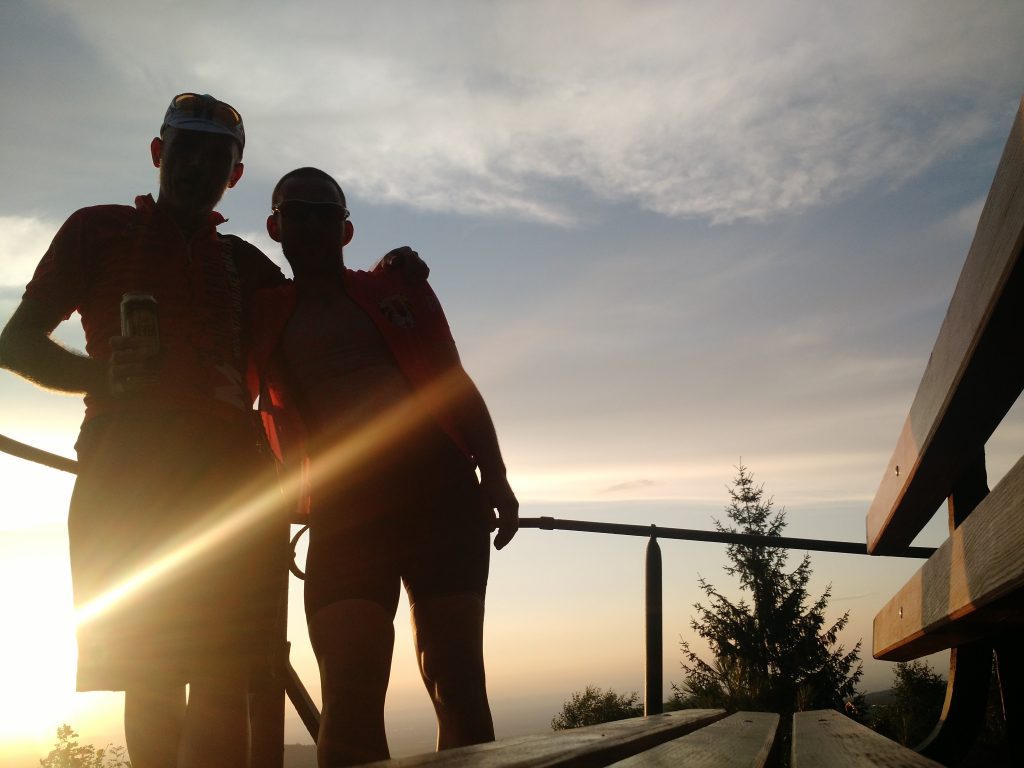 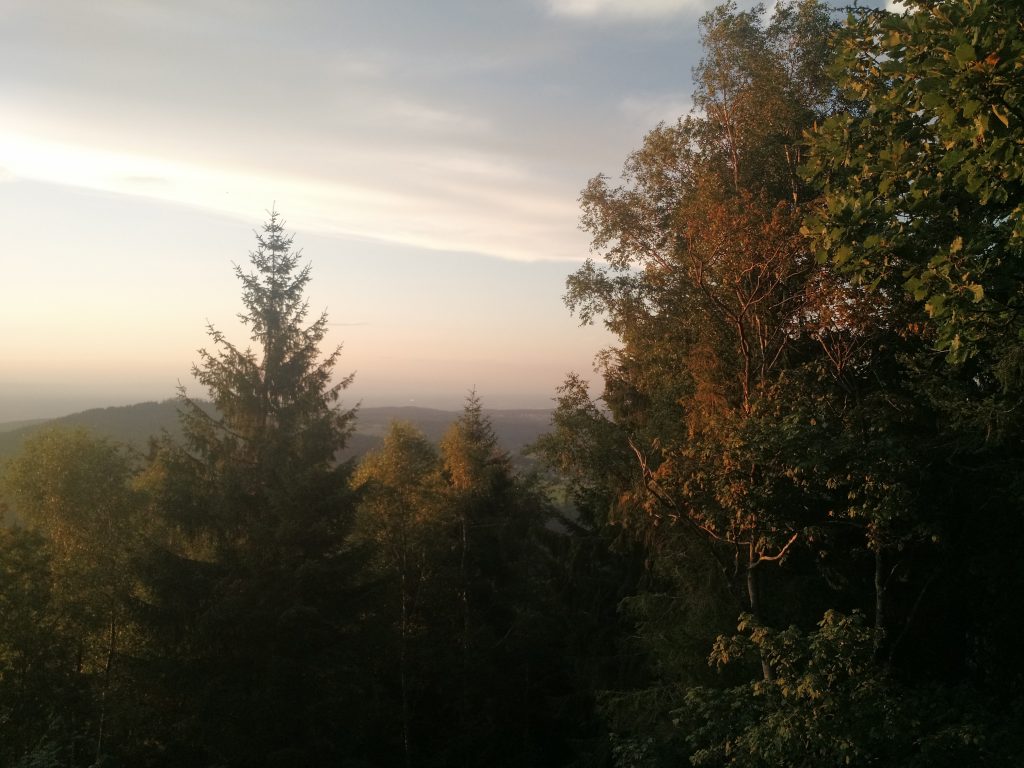 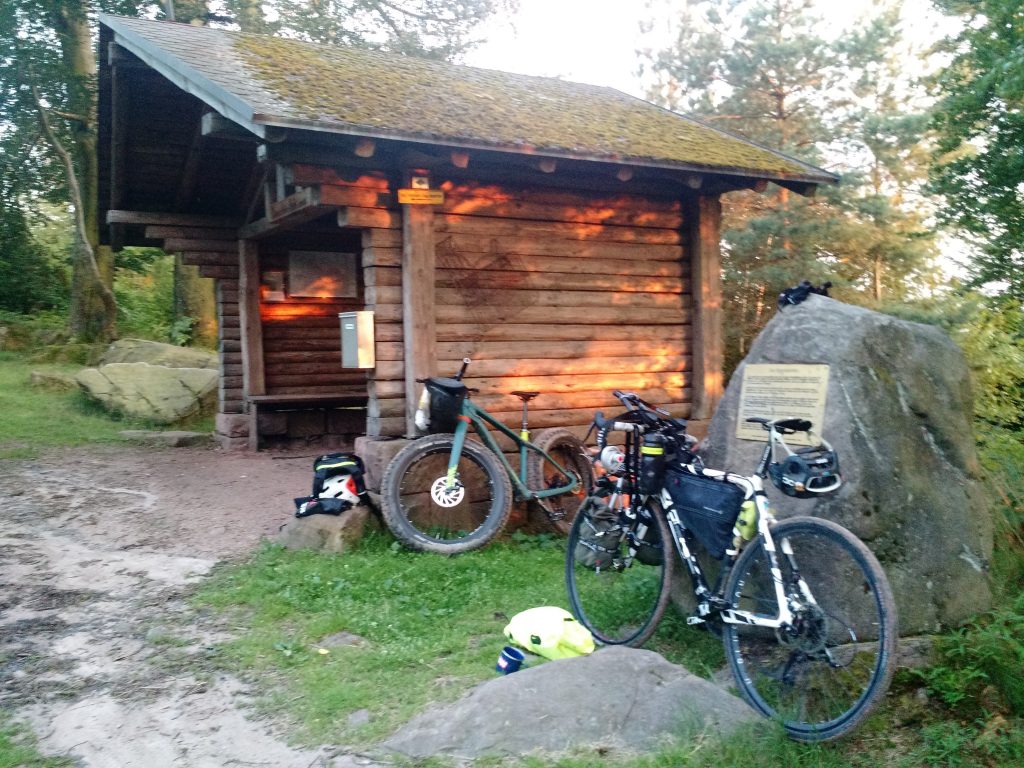 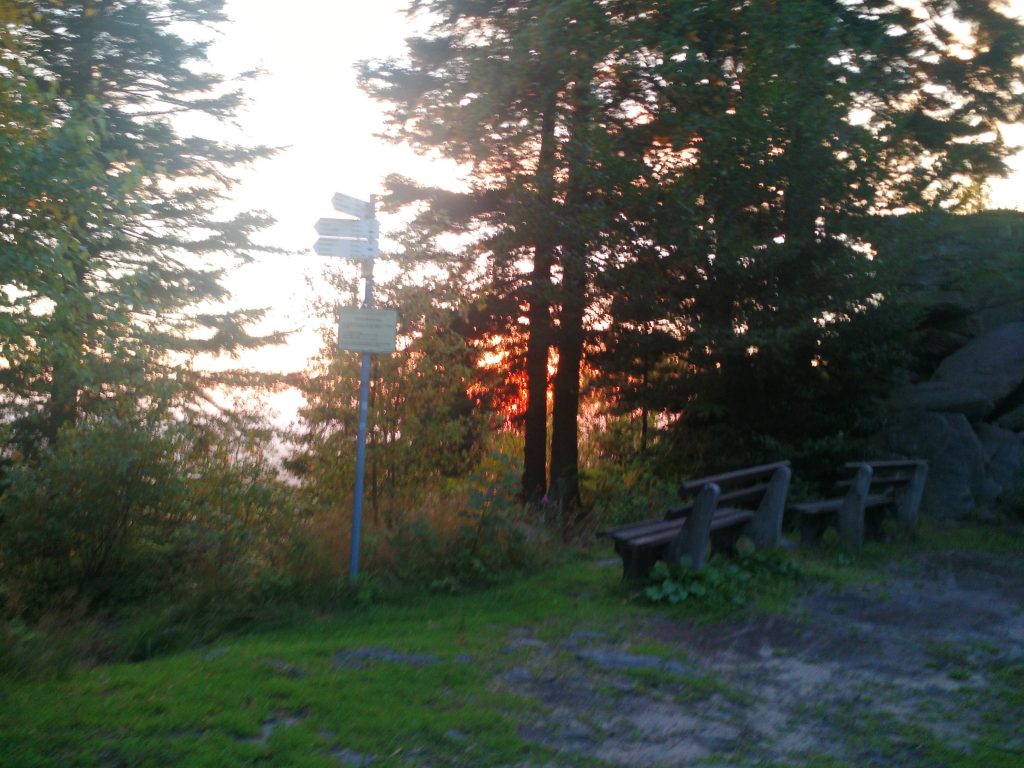 Erik also figured out that near the Bernstein is a source to get water, good to know, no need to carry water up there. Erik started the search for the source to get fresh water and i took care of the campfire. First collecting some wood. This time he also carried a filter for the water which was not necessary, but he used it, because he could 😉 He came back when the fire started. Also the sun went down and made a cheesy red light. 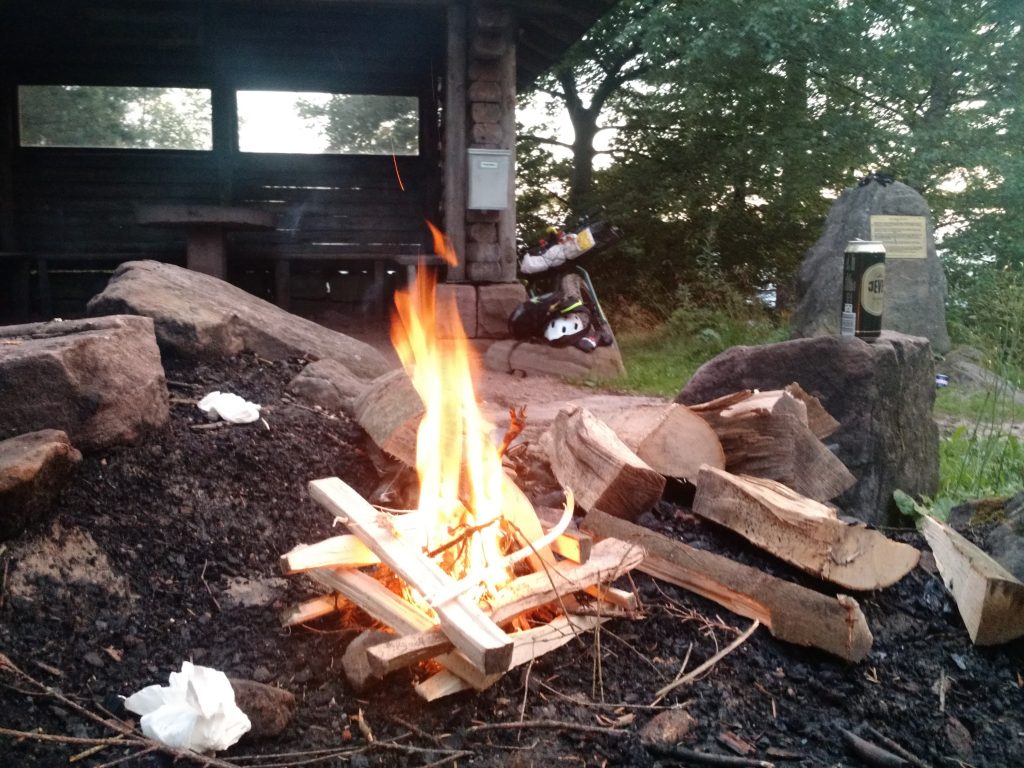 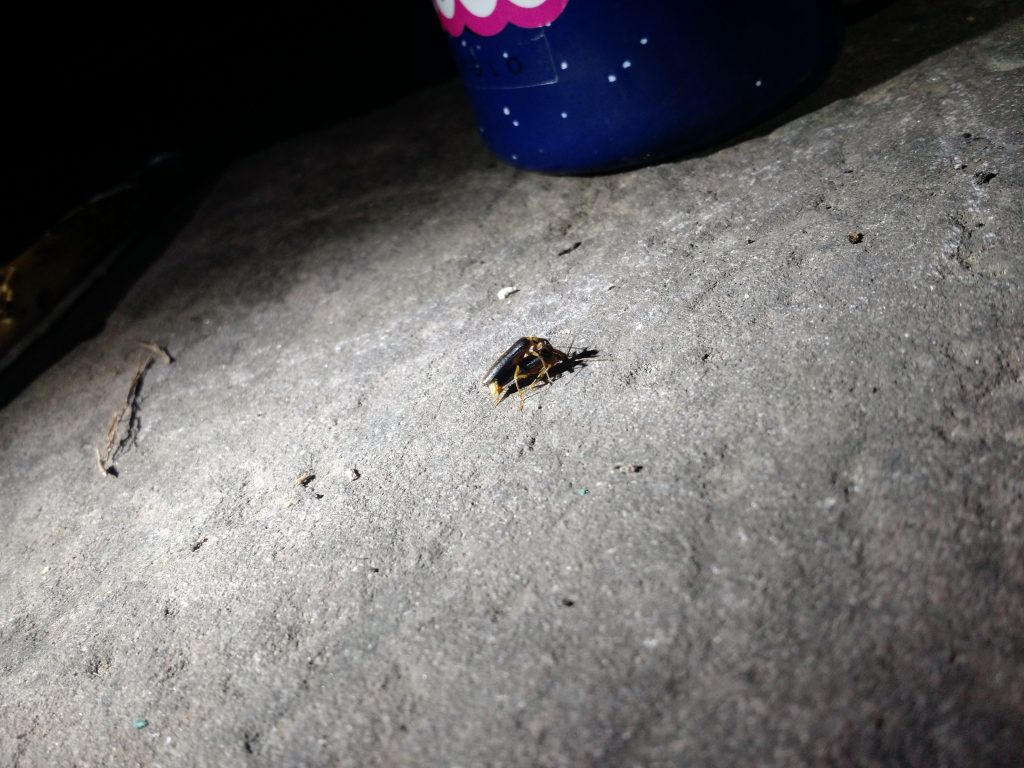 Then came the relaxed part, open a bottle of wine, start the BBQ and enjoy the spot. Outside. Free. Watching the fire. This was the first time for me that we met some very annoying bugs. They had sex on our diner table. No way…. They really sucked so that we switched soon to the campfire. Before i could go to sleep i had to fight against a grasshopper, that colorway i’ve never seen before in our area. Happely i had my hatchet so i was not afraid and well prepared for that fight. Luckily i won and could also go to sleep. Maybe it was of the C.I.A. with a camera on it’s back.

The next morning. wake up at 6.30 a.m. Feeling well. In nature. Erik prepared coffee, morning coffee with a view. Perfect to start a day. We packed and rolled down. I got a flat. Too bad… But then everything went well. Our paths splitted in Ettlingen where Erik parked his camper to take a shower before going to work. I arrived with a big, a really big smile, in the office. Went for a shower (luckily we have some) and then started the workday. Trust me, i was so amazing relaxed the whole day… More to come….