I’ve seen on friday at facebook that my friend Recep was on the road with Toby. I figured out their goal was SIS (SchlaflosImSattel) in the famous Erdbeertal (Strawberry valley). I wanted to sleep outside and ride a few km’s. So i texted Recep if it’s fine to join them for a night, the quick answer was that it’s no prob.

I heard a lot about the SIS the last years. Recep has been there often when he owned Fixie Inc. Stories about hiding in the woods with beers for the riders. I packed the bike in the morning and started with sun. The ride was about 80 k’s in the Pfalz. Passing small villages, a lot of wineries and old houses. 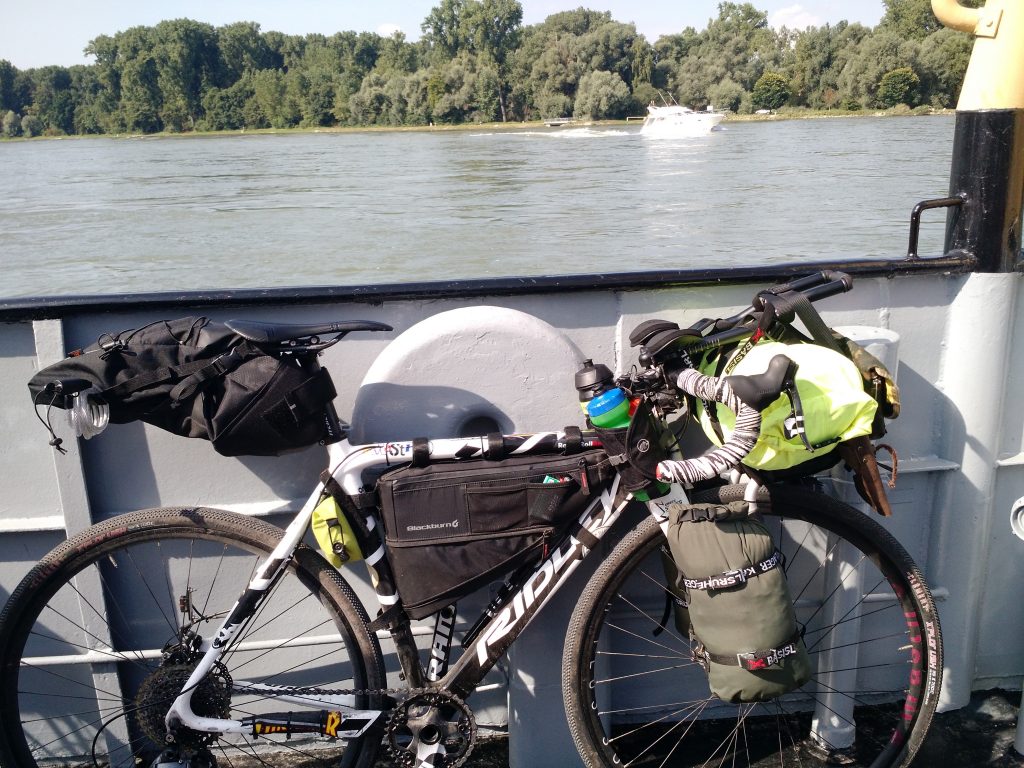 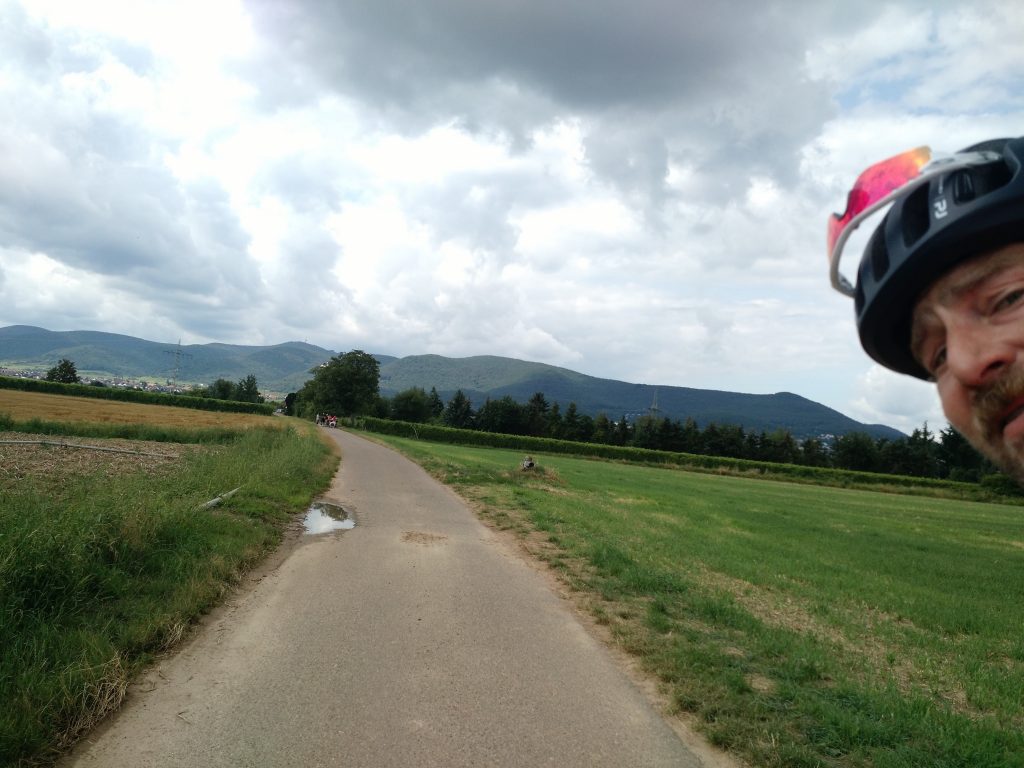 When passing Neustadt an der Weinstrasse the uphill started. Mostly a bike lane. When arriving at the village near the Erdbeertal i met a MTB guy and asked for the way to go. He just replied that i should follow him 🙂 Nice move. We rode side by side to there and talked a bit. Arriving there was amazing! In a valley, dead end. Tents, over and over. Sourrounded by forest. I started to search for Recep. I found him at the food lane. After a hearly hello he adviced me to tell Phaty (Boss of the event) who i am and want are my wishes. So i did, told him: ‘I’m a friend of Recep, would like to stay the night here in my tent, just arrived with the bike.’ He said ‘ok’ and gave me a ribbon for the wrist, so i was official accepeted 🙂 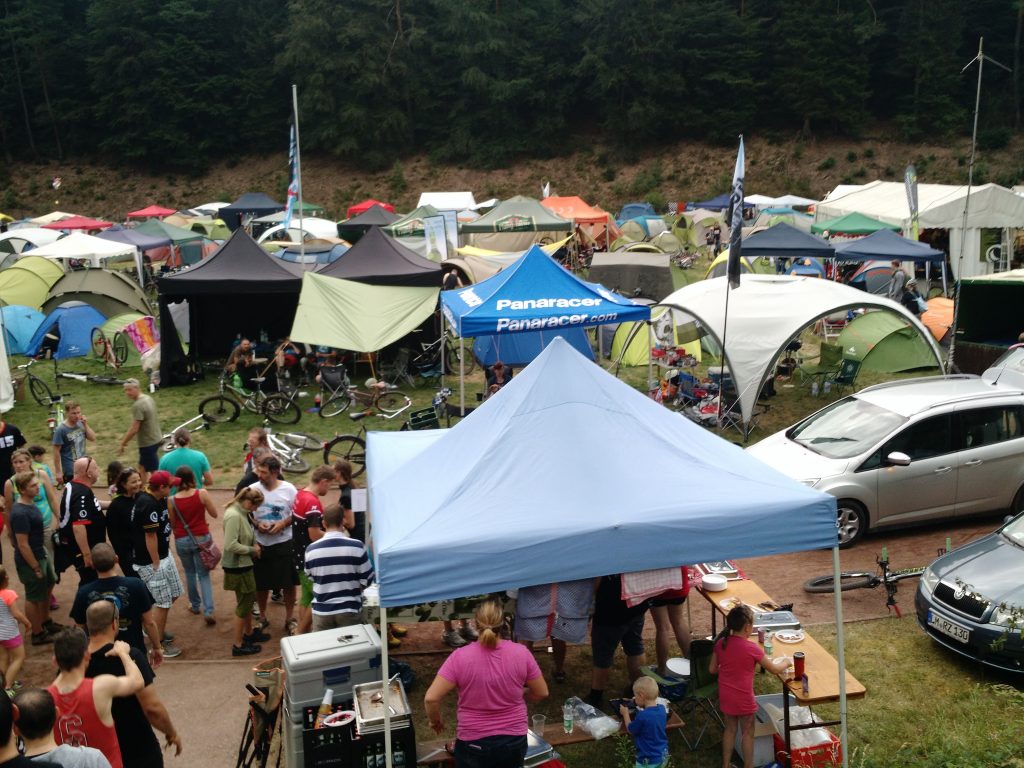 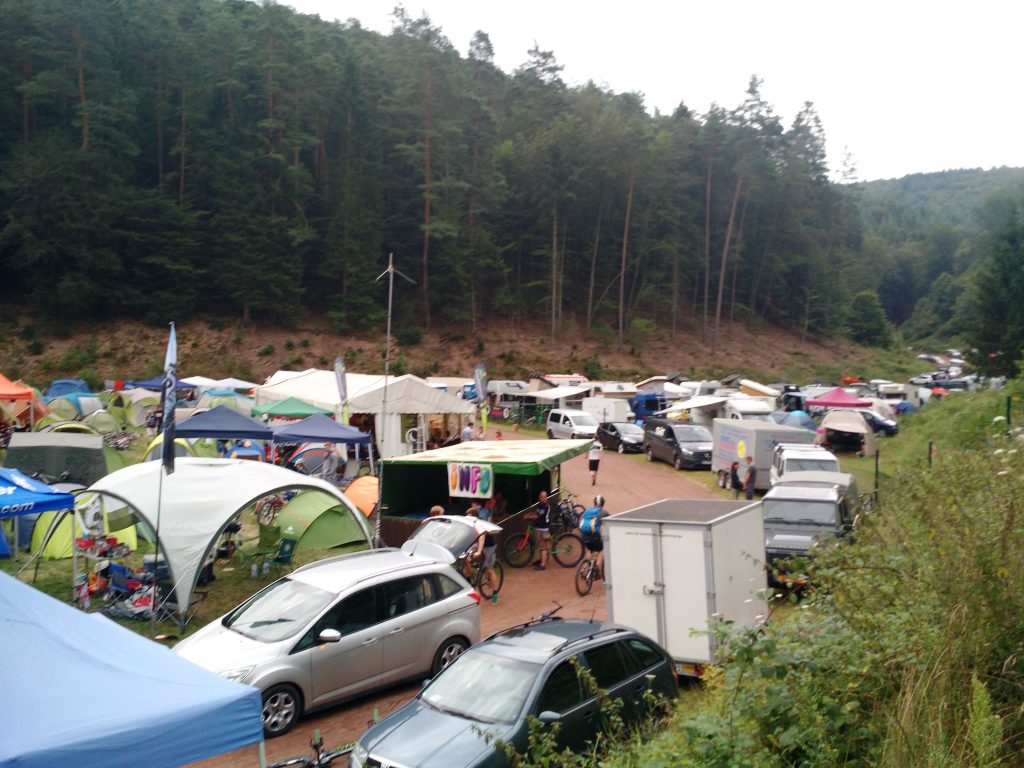 Then i got connected to the crew where Recep and Toby were located. Really nice people to meet! All the people here were horrible bike addicted. So many lovely bikes! First of all i grabbed a beer, then the ritual was that if someone get’s drinks he buys as much he can carry and shares it. I’ve also seen the biggest bialetti in my live, it could serve 8(!) mugs of coffee in one preparaion! I got me something to eat, delicoious local food for small money. During late lunch i could watch the kids race!

Then it took a while and a few beers till the crowd got excited… The start of the mainrace came nearer… People get dressed in funny ways, the bikes got prepared with lights (many of them!).

The start got emotional cause Phaty said some words about a friend of who get shot the last year and this friend’s daugther was there to start the race. Then the start, everybody was excited! One round was about 13k’s in the woods. So it took a while till the first one was passing the start/finish line. I tried the local wine for a while and felt in my tent for sleep… The race was still going on…. 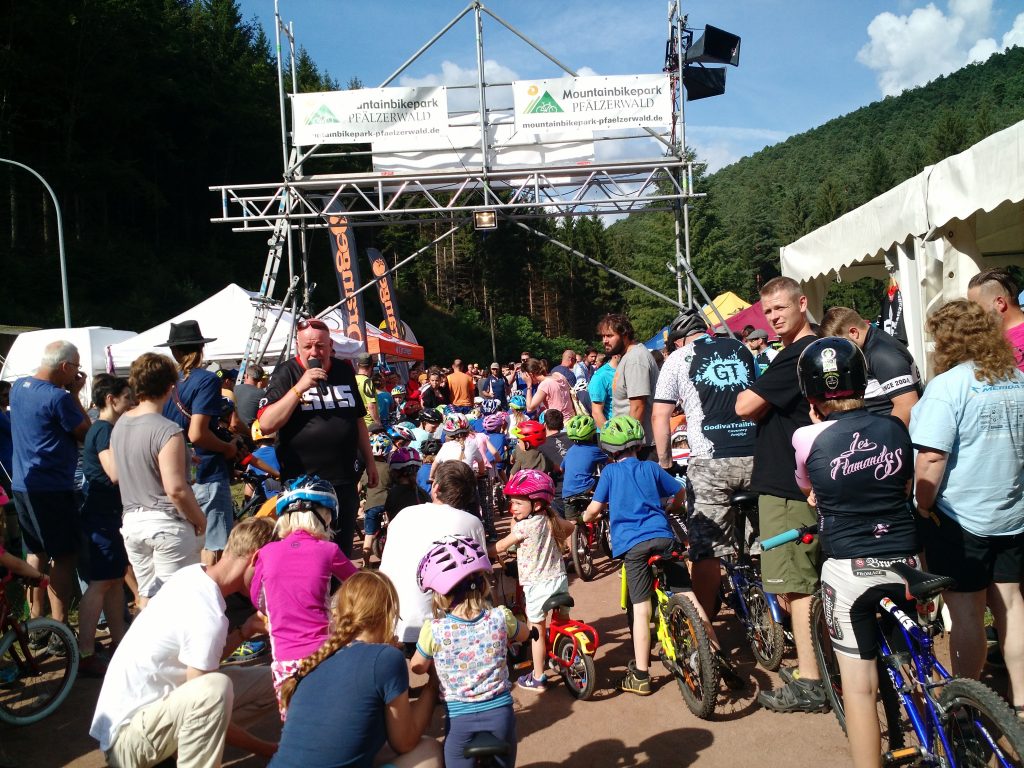 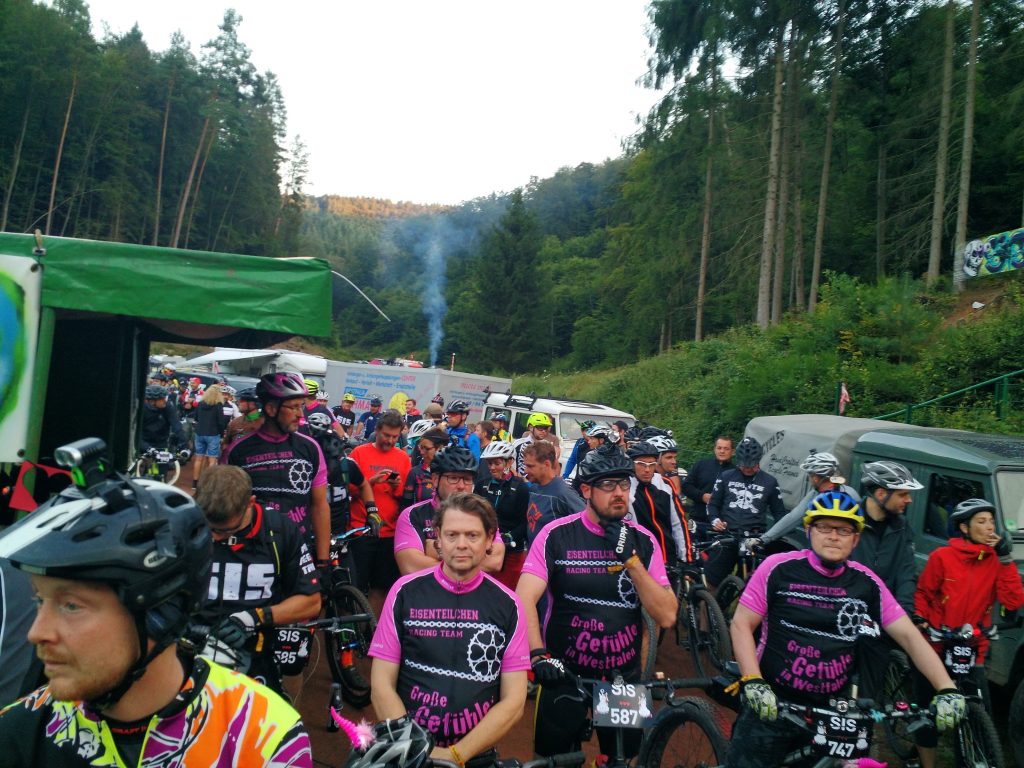 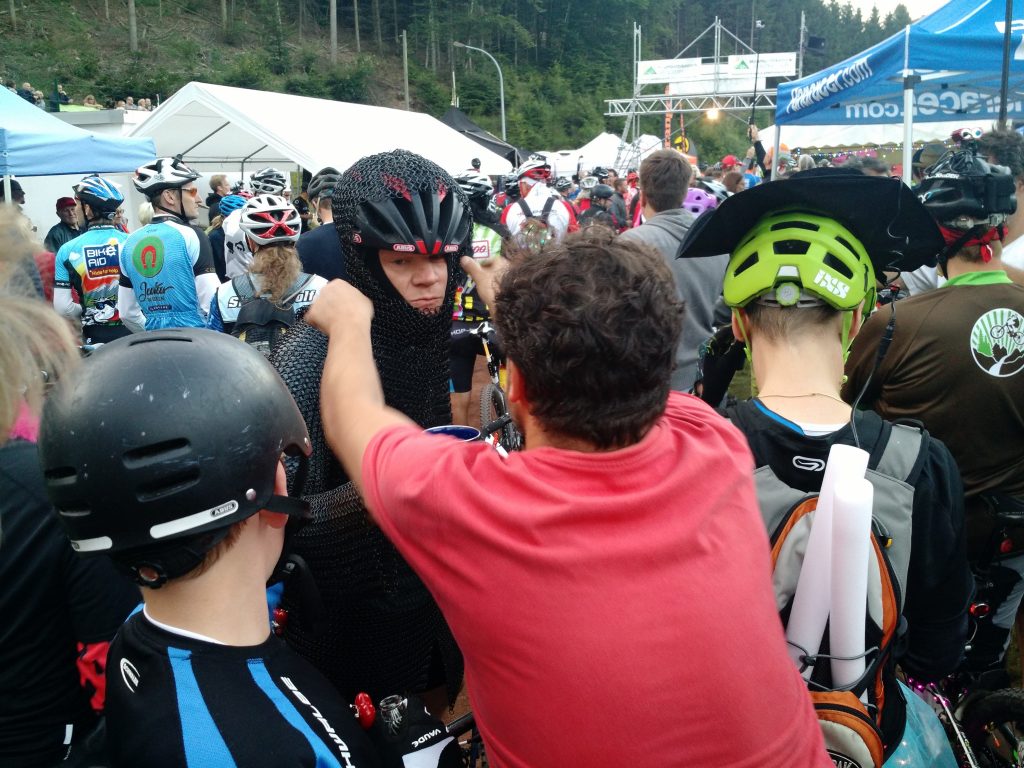 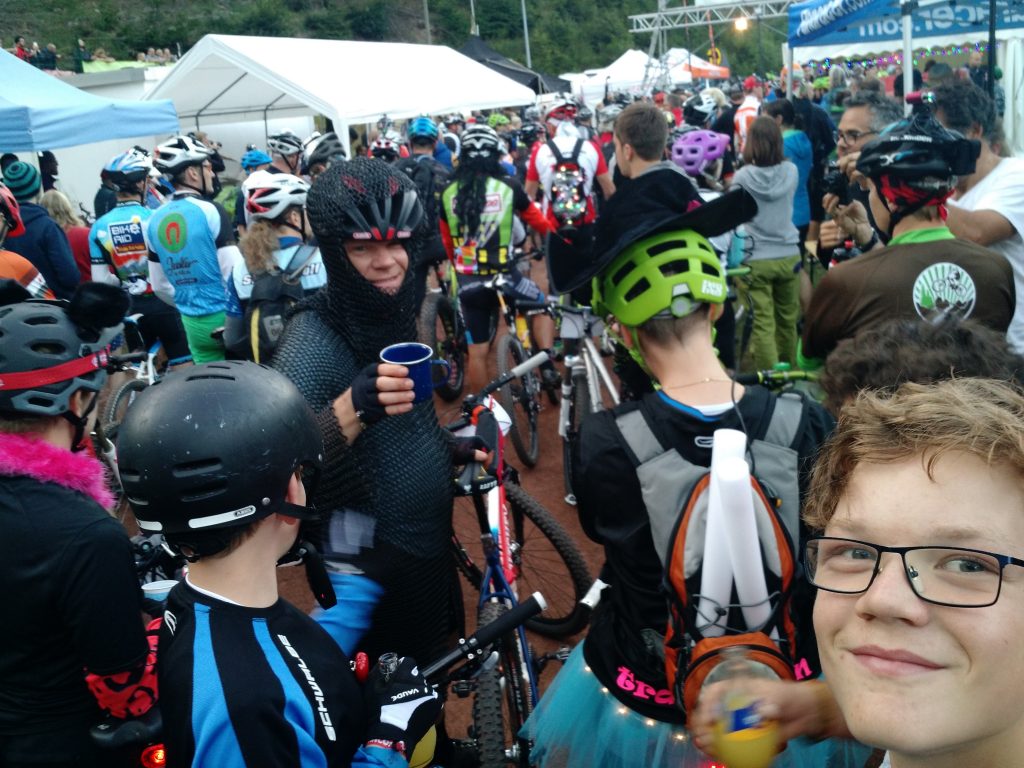 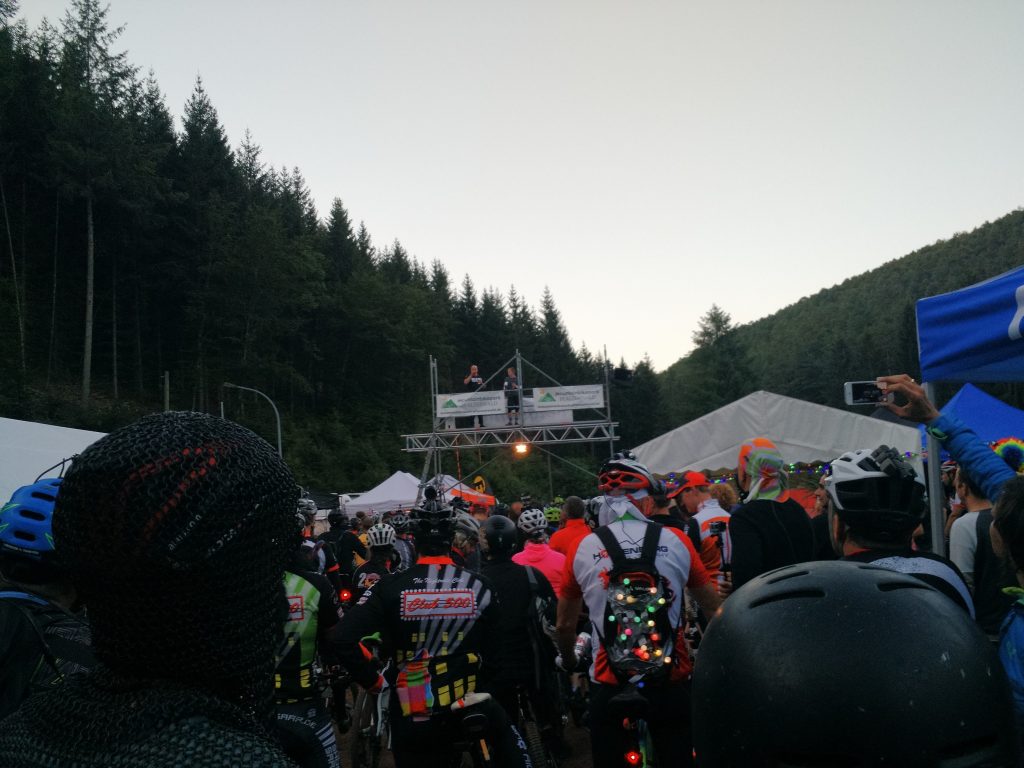 When the ceremony was over the boys came back to the camp and made another coffee. Then we started packing our stuff to leave this magic space. I decided to ride with Recep and Toby to the next trainstation and get back home. I decided to go there next year and compete 🙂 Below are some impressions of 2015 if found. rolling home with the boyz