Two overnighters in a week. What a week! This week we had two days off in fact of bank holidays, what else than an overnighter at the Bernstein. This time with the MTB and a working colleague which would like to try something new, why not an overnighter! I lend her some bags to pack the bike. It always good to have some more stuff than needed. We started around 13 o’clock because the weekend before started wintertime and the sun goes down around 5 pm. For autumn the weather was wonderful, around 10° and sunny. The colors in the woods amazed us by the uphill. We managed it to arrive at the Bernstein shortly before the sundown. Pefect timing! 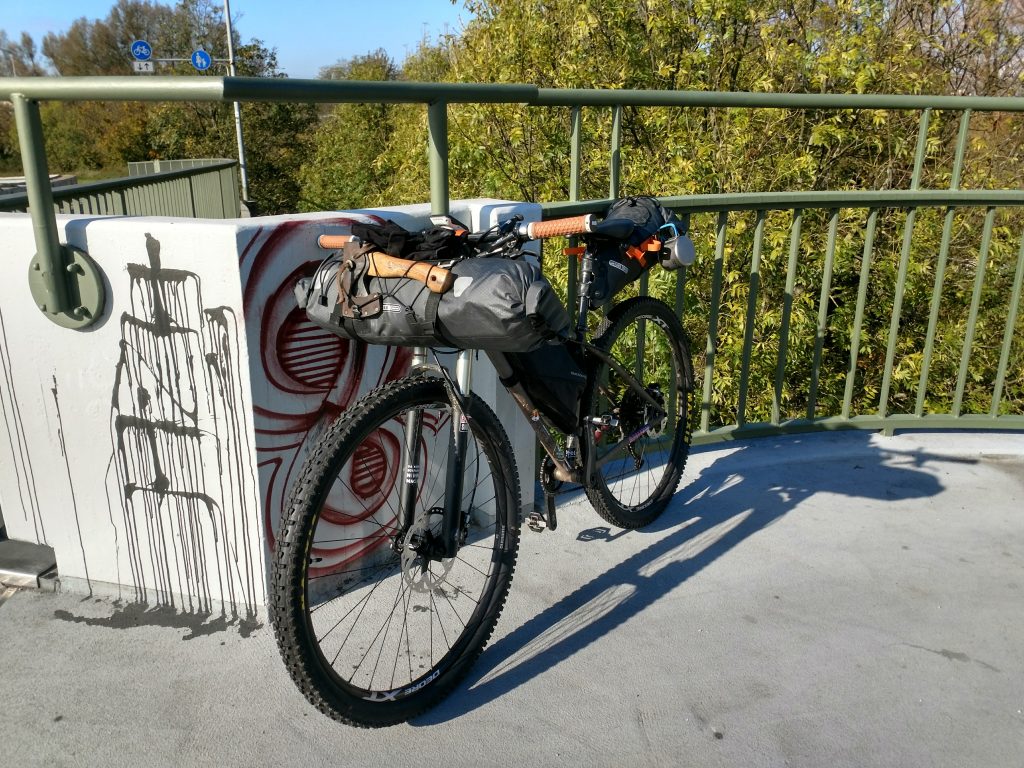 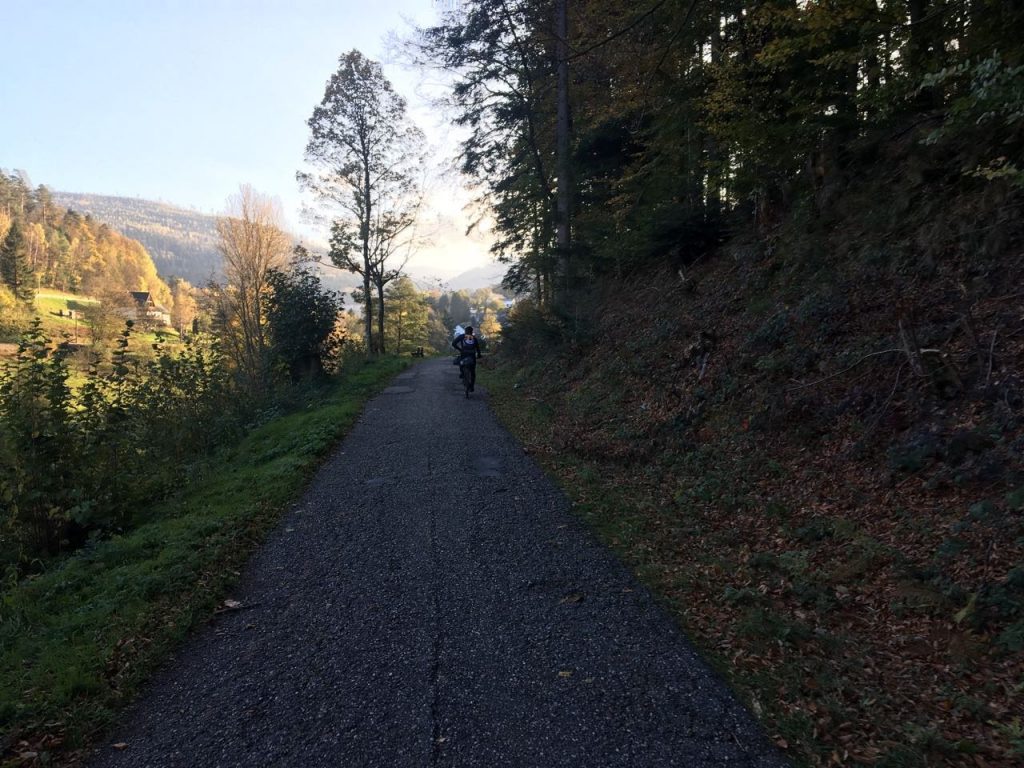 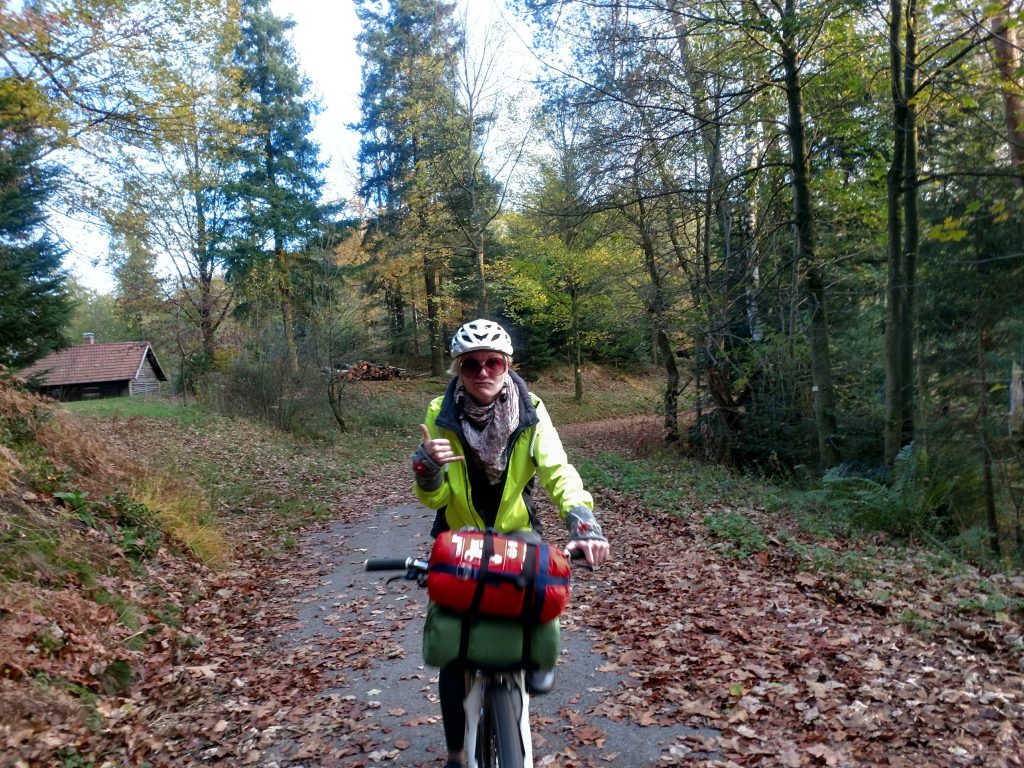 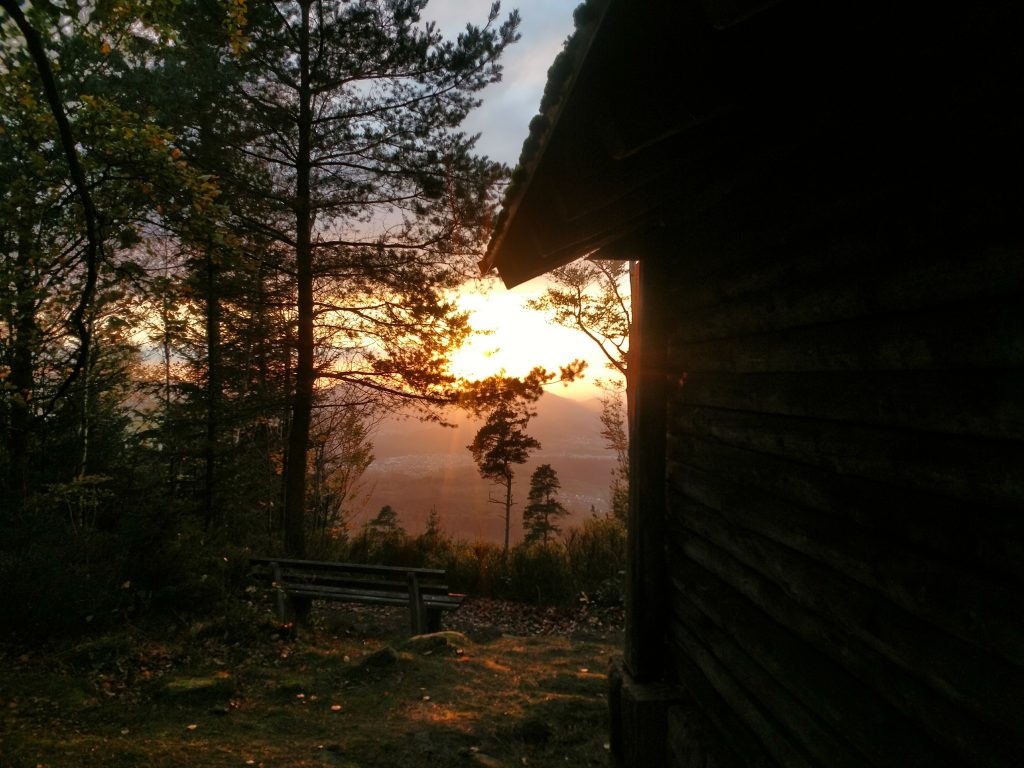 First we jumped into some warmer und dry clothes and then directly went on the rock to enjoy the view and the sundown. Awesome scenery! When we hang aroung on the rock arrived a group of adults with some kids packed with BBQ equipment and mulled wine. They started the fire. Fine! It was a nice crew and we stood at the fire. We collected some more wood for the time when they will leave. When they left there was still wood available which they spent us, nice move! We started our BBQ and had some wine. Around midnight we went sleeping in the cabin. 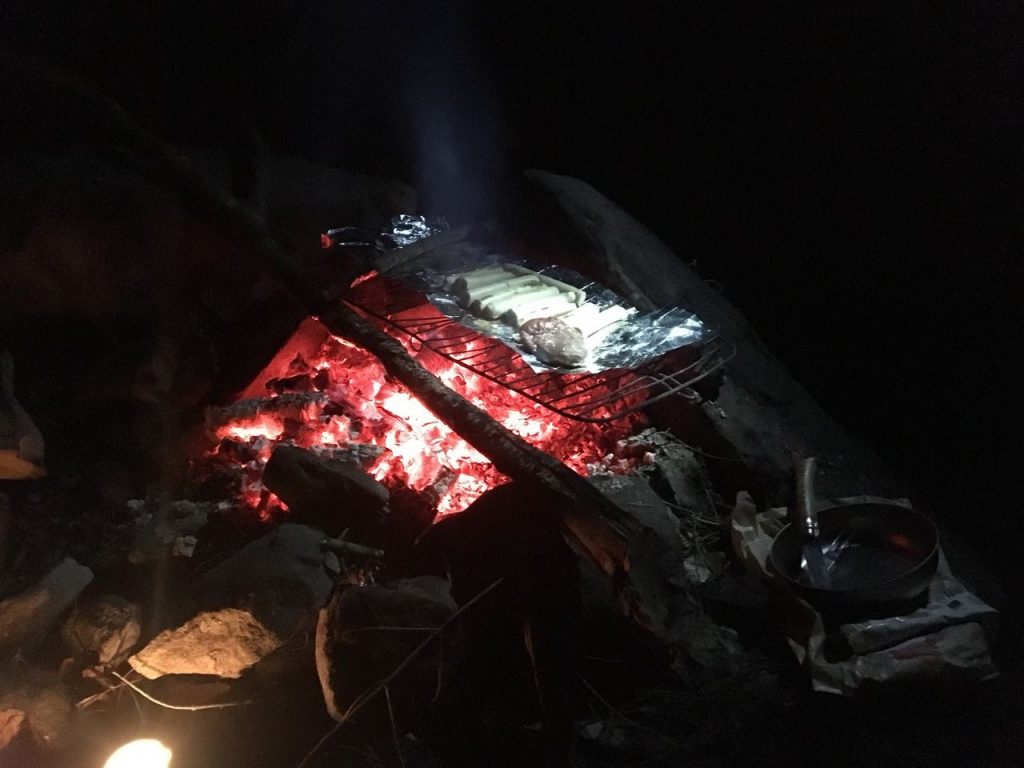 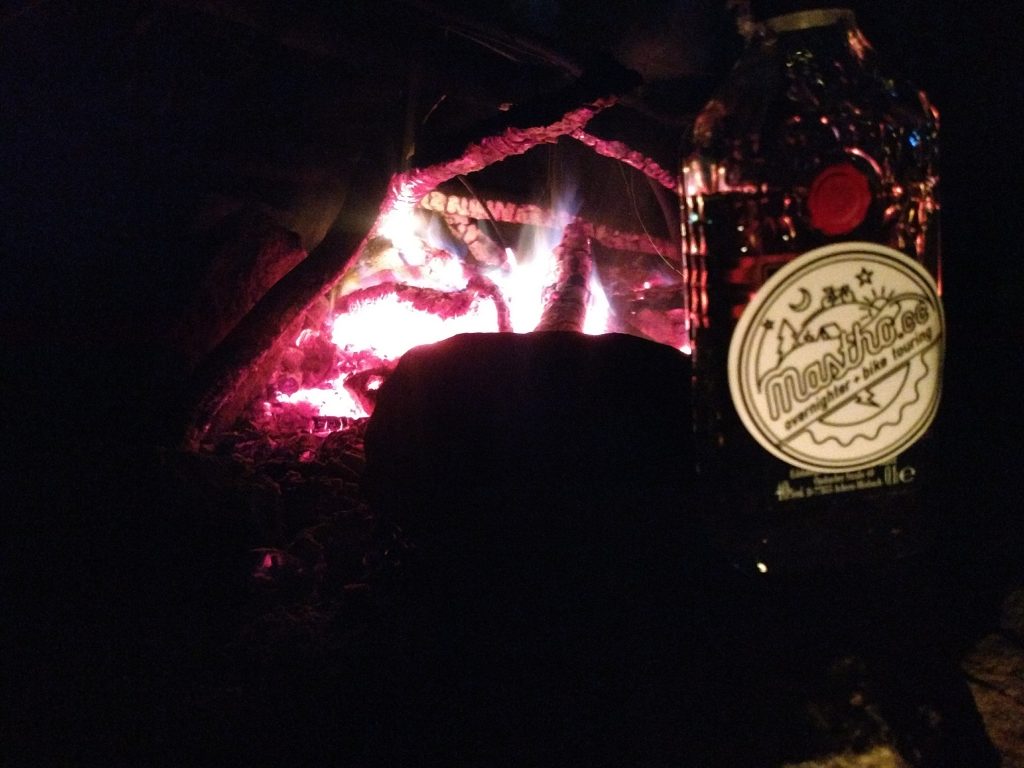 When we woke up it wasn’t that cold. The sun came out and we had coffee and tea. The way back home was great, it was more warm than the day before and we choosed a new path through the woods. Thanks Nina for this coldest Overnighter i had till now 🙂 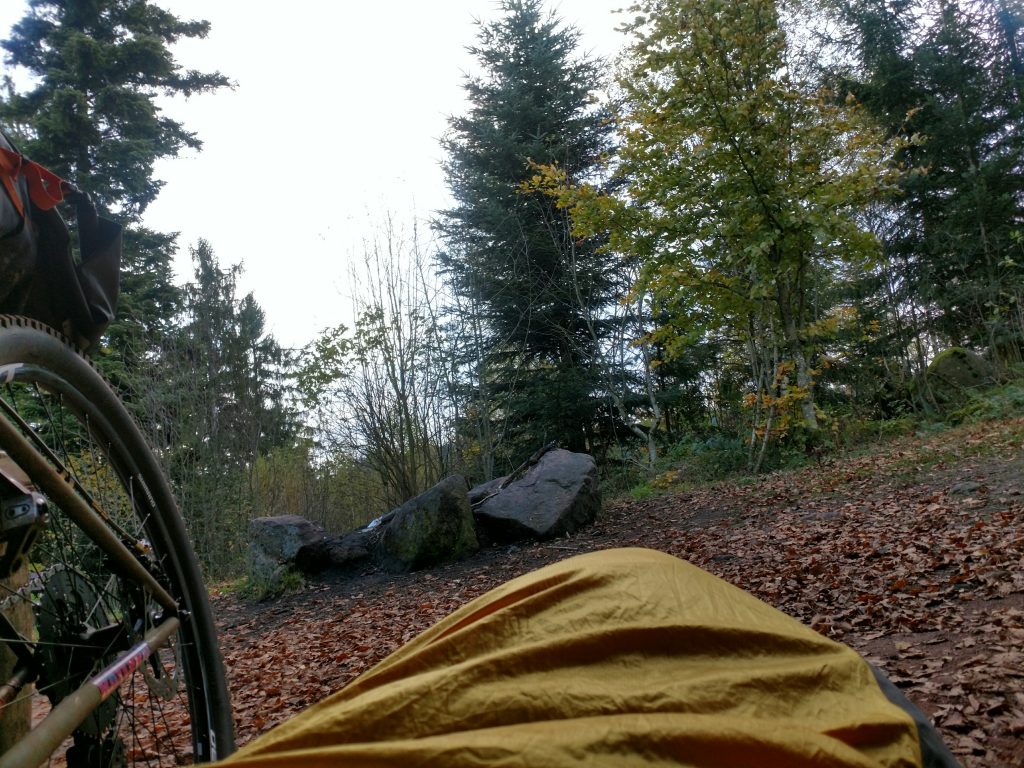 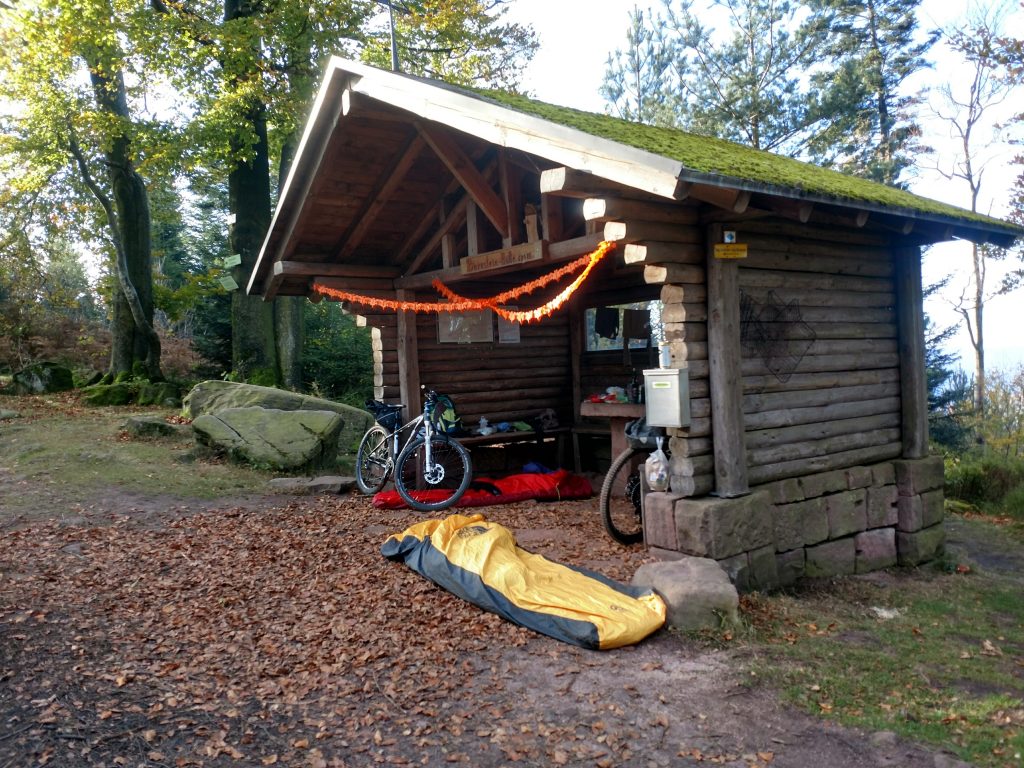 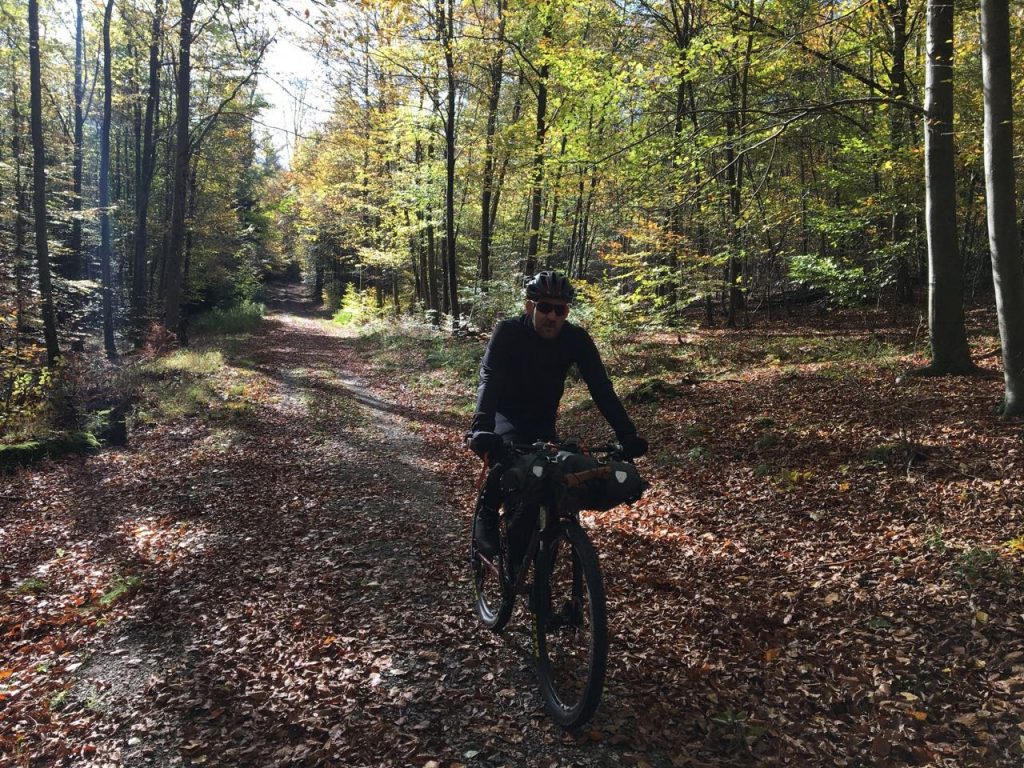 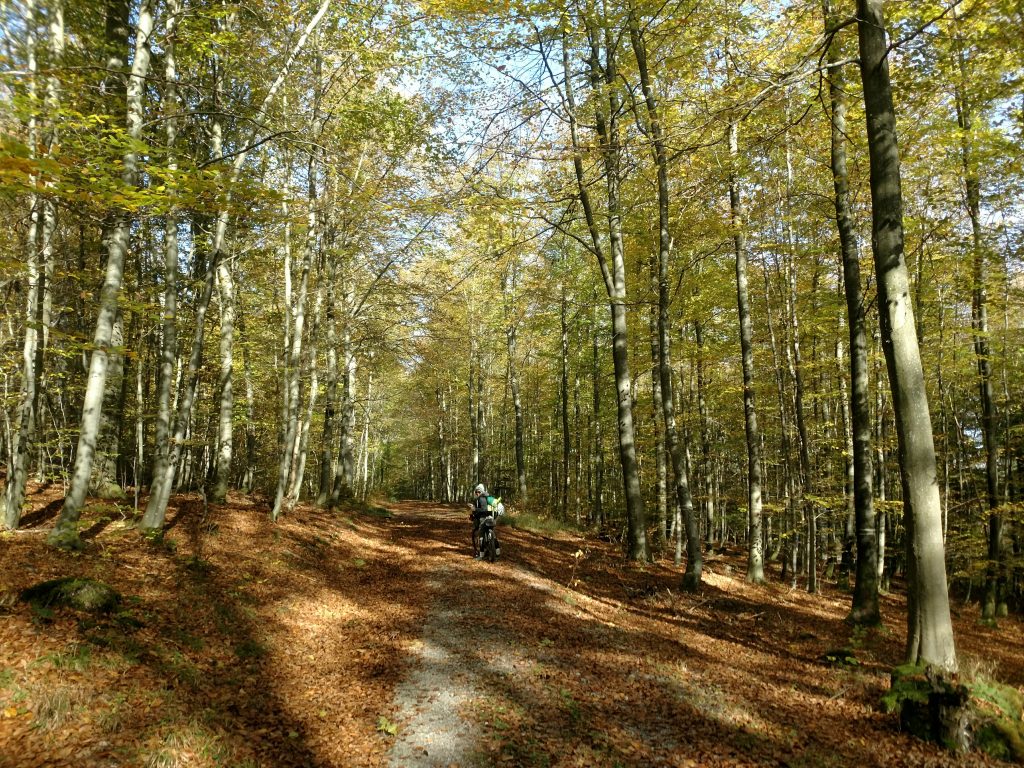 Back at home i had to make the laundry, preparing the other bike for the next overnighter which was the next day…. I went to work with my packed bike, i went directly to the trainstation to get to Heidelberg. In the Fahrstil Clubhouse was a talk of Gunnar Fehlau about bikepacking, overnighter and micro adventures. Some days before i got an email of him that there will be an overnighter after 🙂 I arrived early at the clubhouse, Walter and Uwe were already there. Gunnar still on the way. He wanted to check out two possible spots. Also my friend Oli was joining us tonight. I had to guarantee Gunnar that he’s not an asshole 😀 Easy job for me. Gunnar’s talk was a great pleasure to listen. When he finished half the audience was preparing for the overnighter, the other half were interested in how a modern touring bike is packed, Gunnar showed them. For our spot we had to ride 20 kilometers. It was fun with this crew. 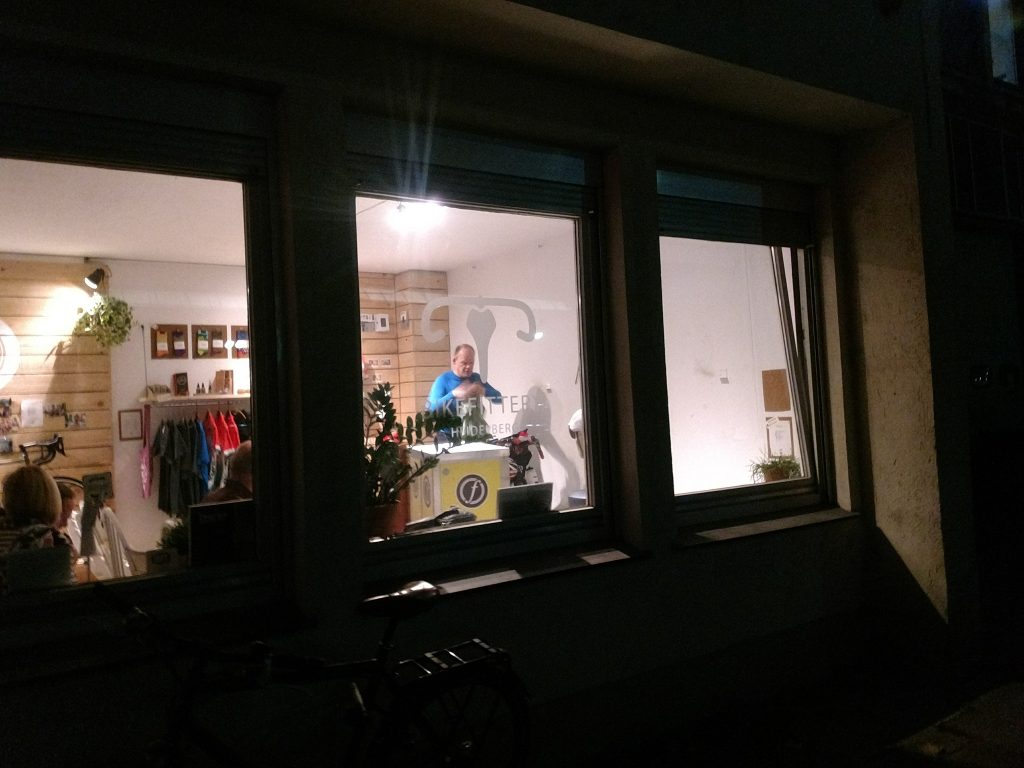 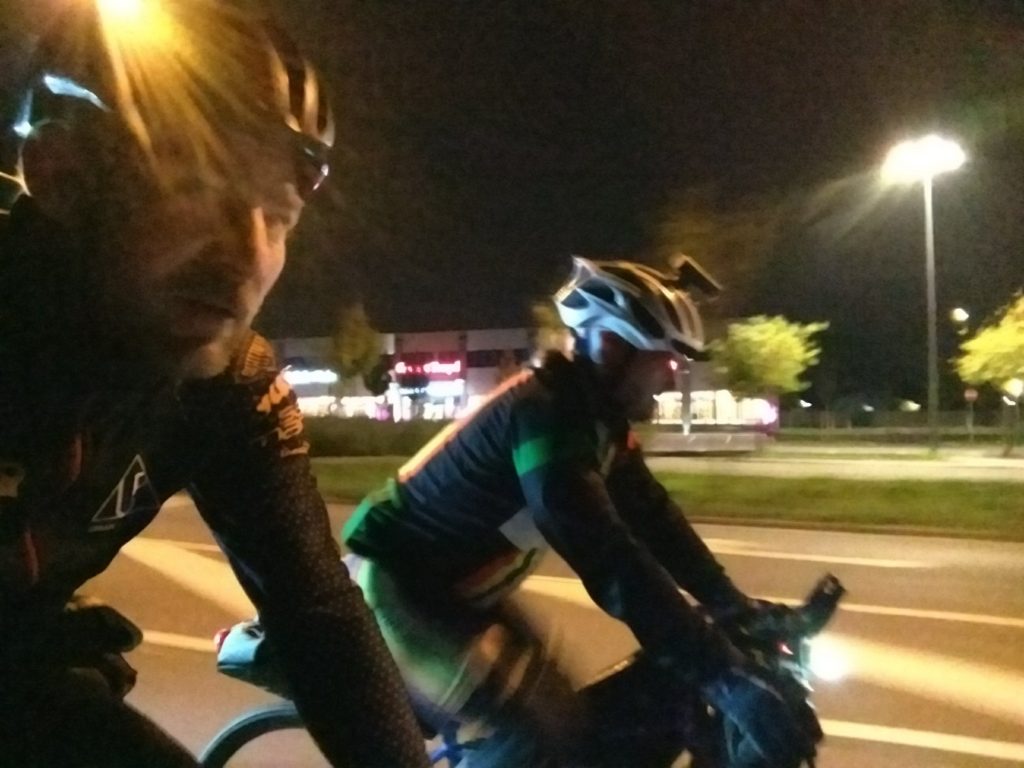 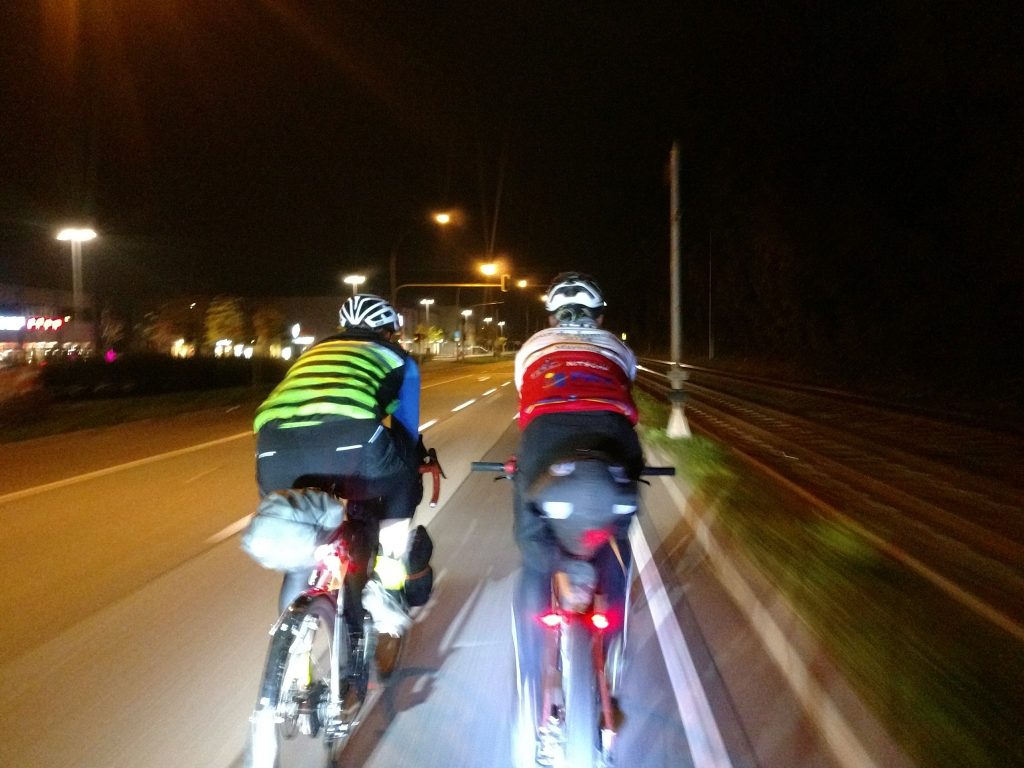 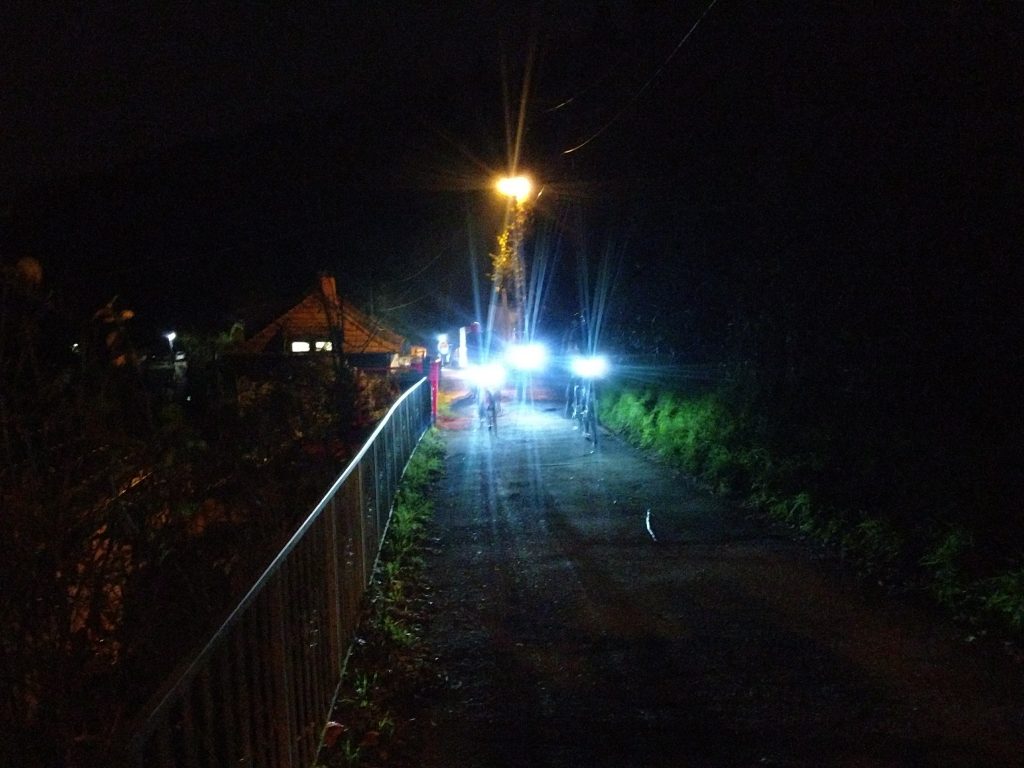 In Weinheim started the uphill. It wasn’t too much and finally we arrived at a huge cabin. Collecting woods was the first thing to start the campfire. Because everyone was experienced it was a short time till we got warmed by it. Now stories, jokes of Walter and beers. A nice crew. We went quite late to sleep. 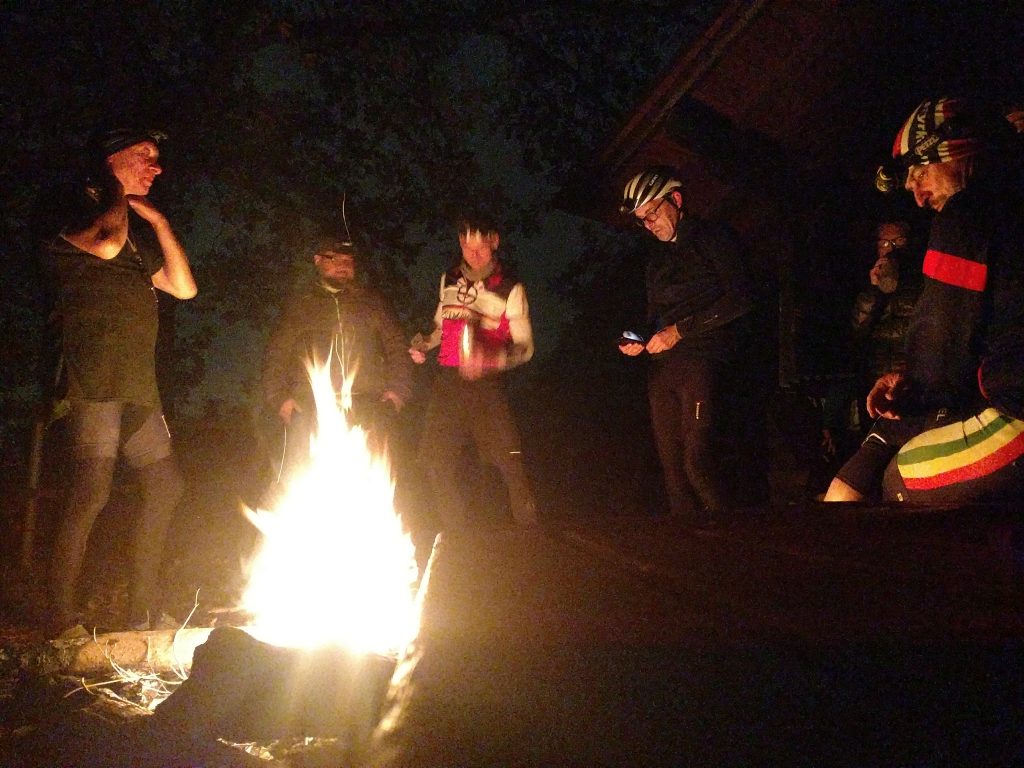 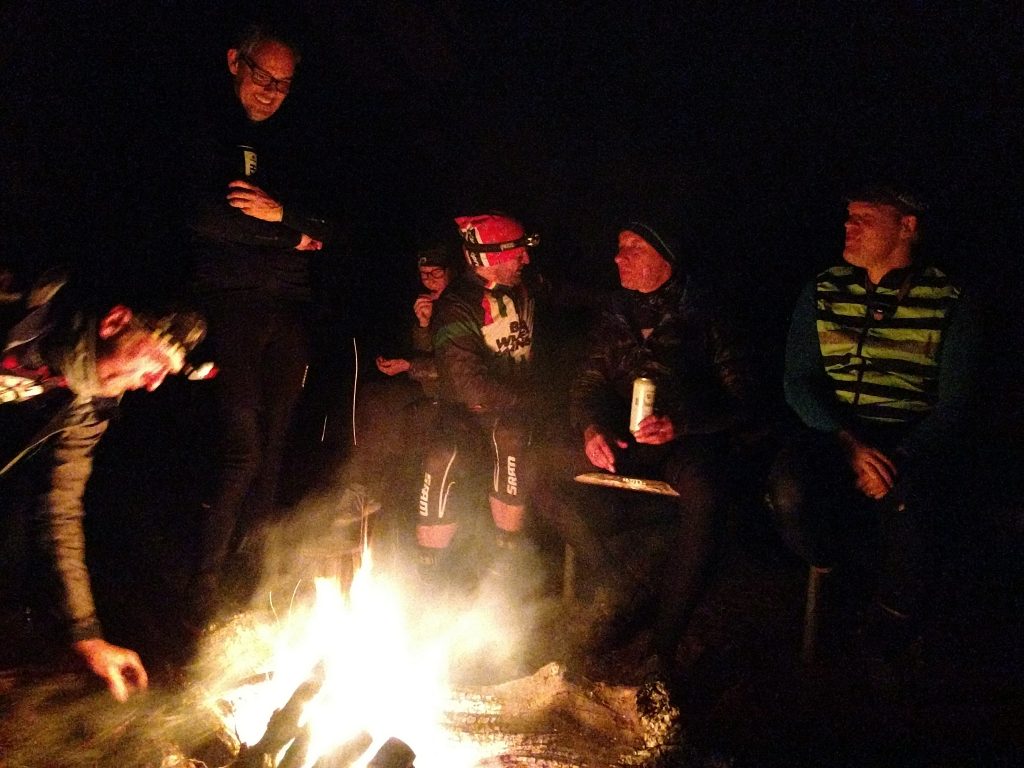 The next morning we Gunnar started coffee at 6:46h. The first one started early, i had to wait till the last one’s woke up. Oli, Walter, Uwe and me were the last one’s to leave the spot. Soon Uwe split to ride to his car (a bit away, 100 kilometers…) and we went to the trainstation to get a train home. It was a great pleasure to meet these people! Thanks Fahrstil, Gunnar, Britta, Walter, Kay, Oli, Uwe, Pascal and one i forgot the name 😉 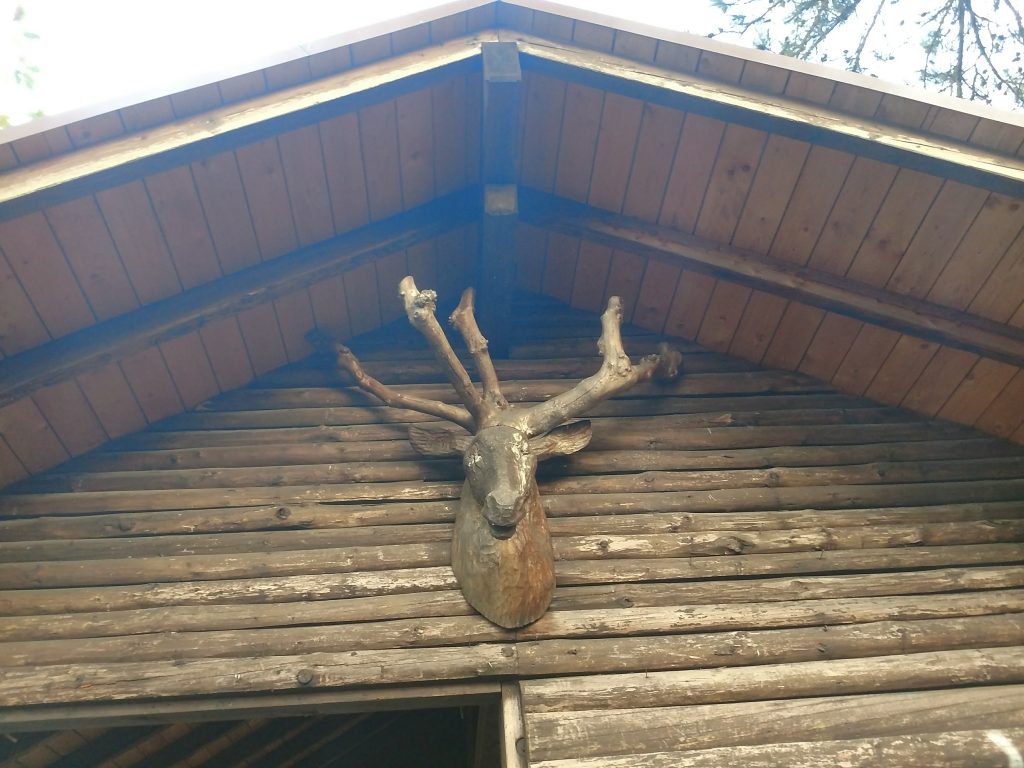 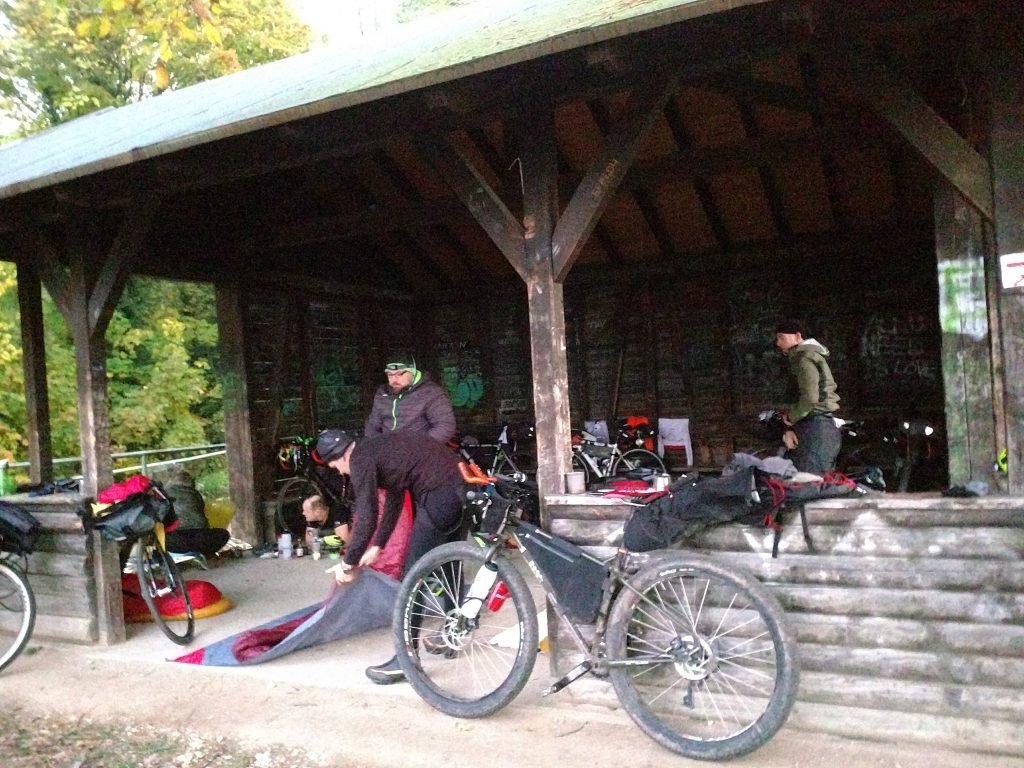 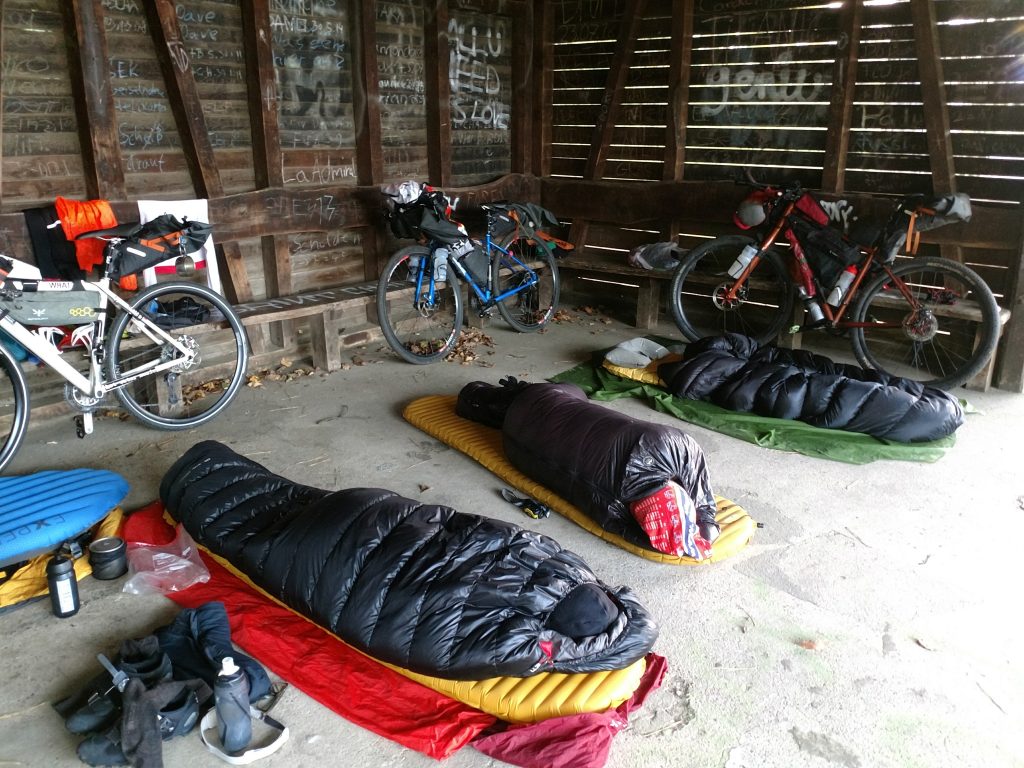 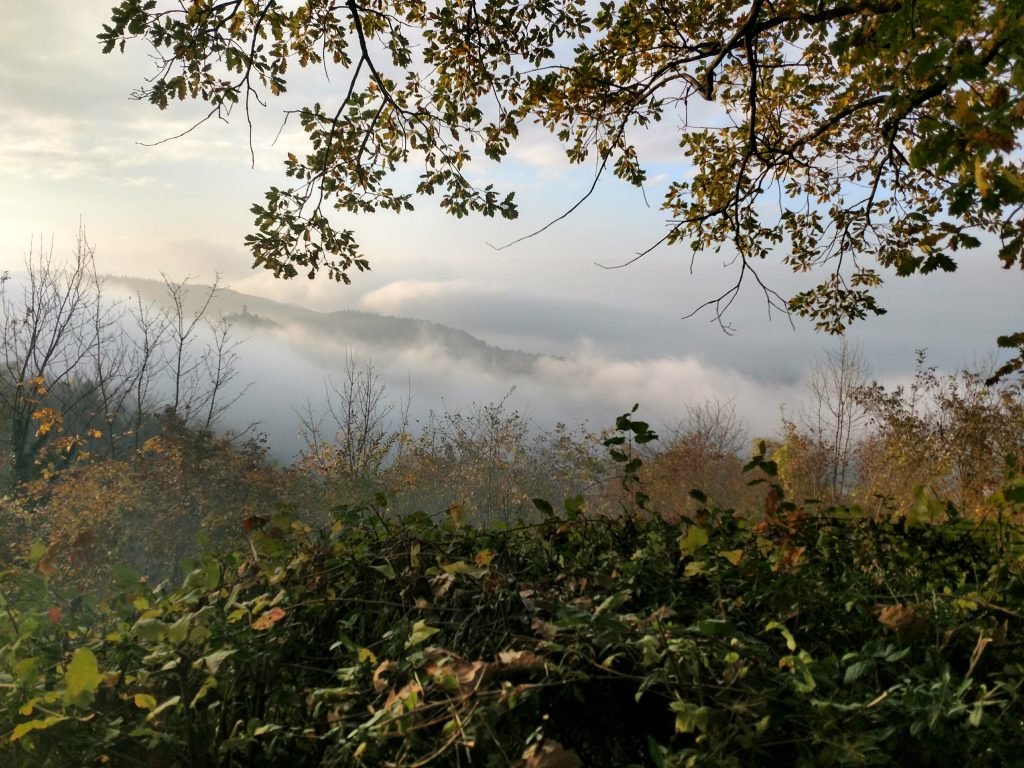